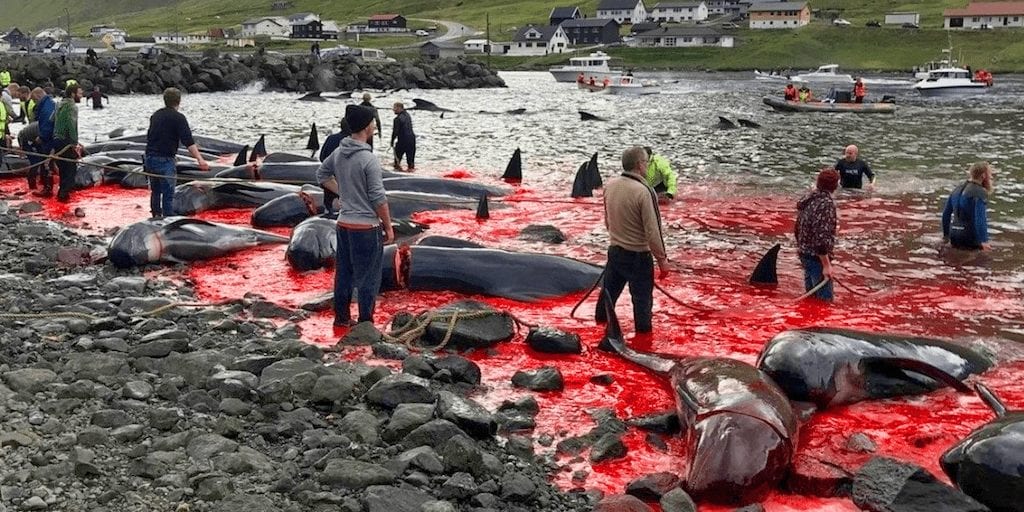 A review was ordered after a petition with around 1.3 million signatures urging a ban of the traditional hunt was submitted to the government.

The North Atlantic island country said it will provisionally limit its annual “grind”, known as the “Grindadráp” in Faroese, to 500 animals.

The decision came after a review was ordered in February, in response to the uproar.

The tradition of hunting sea-mammals  where hunters surround dolphins or pilot whales with a wide semi-circle of fishing boats and drive them into a shallow bay where they are beached has been practised for hundreds of years.

However, last year’s event, which led to the killing of more than 1,428 white-sided dolphins, has been severely criticised by locals and groups involved in the practice.

It was the largest number of dolphins killed in one day in the Faroe Islands.

The promiscuous slaughter prompted campaigners to float a petition calling for a ban on the hunt. It gathered almost 1.3 million signatures.

In response, the country’s government announced that the annual cull of dolphins will be limited to 500 for the next two years.

The government noted: “Aspects of that catch were not satisfactory, in particular the unusually large number of dolphins killed.

“This made procedures difficult to manage and is unlikely to be a sustainable level of catch on a long-term annual basis.”

However,  it insisted the grind remains an “important supplement to the livelihoods of Faroe Islanders”.

‘Unwillingness to question a practice’

Despite the objections, the review only considered the dolphin hunt aspect of the grind – it had no provisions for the hunting of small whales.

Consequently, the first grindadrap of this year took place on the Faroe Islands in May.

Eyewitnesses reported that an entire school of about 60 pilot whales was killed at the Sandágerði beach, South of the Faroes capital of Tórshavn.

According to reports, other, smaller dolphins that were among the pilot whales driven onto the beach were released.

In the second “grindadráp” later the same month around 119 pilot whales (which included several pregnant females) were killed.

“The killing of an entire group of pilot whales demonstrates an unwillingness to question a practice for which there is no justification in the 21st century” said Nicolas Entrup, Director of International Relations at marine welfare organisation OceanCare.