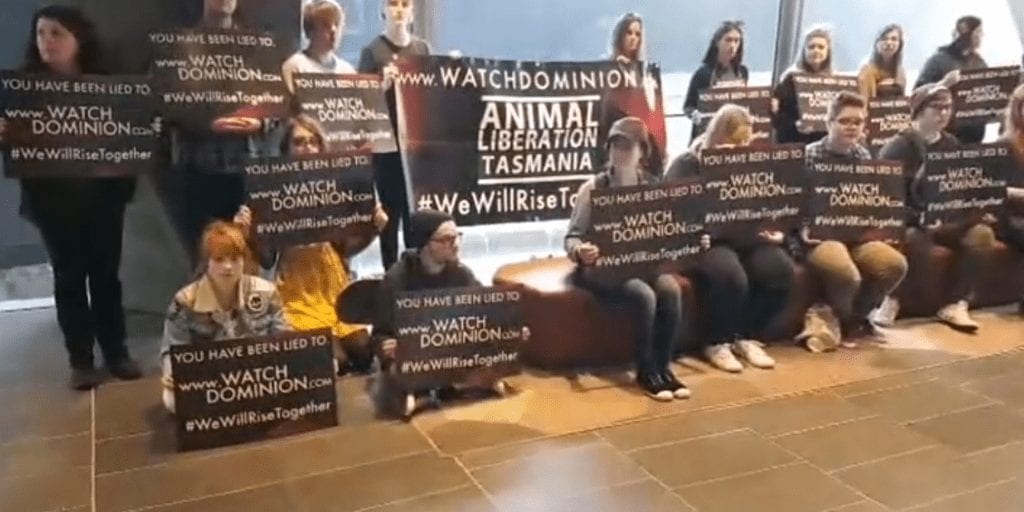 A group of vegan activists made a deal to save the lives of three lambs as the biggest day of animal rights demonstrations in history swept through Australia.

Demonstrations were organised by the makers of vegan documentary Dominion, which was released a year ago today.

In one incident, 20 activists chained themselves to machinery at slaughterhouse the Carey Bros Abattoir at Yangan, south-west of Brisbane.

Workers at the site were in a stand-off with the activists for two hours as the group refused to leave.

Eventually they agreed to end to demonstration on the condition that the slaughterhouse spared the lives of three lambs, which were given to the activists.

The rescued lambs were taken to sanctuary Farm Animal Rescue to live out the rest of their lives.

“It was pretty much what was expected,” one of the protesters told 7News.

Demonstrations have been held across the country, urging people to watch Dominion and reassess their eating habits.

As the drama was unfolding at Carey Bros Abbatiore, nine more activists chained themselves to Goulburn slaughterhouse south-west of Sydney.

The activists were escorted off the property and are expected to be charged by police.

Lost Earthlings posted on Facebook: “Activists are currently inside Goulburn slaughterhouse preventing the brutal slaughter of animals, as part of coordinated actions across the country to draw attention to the inherent cruelty of animal agriculture and to call for industry transparency.

“Businesses that engage in animal abuse should not be able to do so in secrecy — consumers have a right to know what they’re paying for.”

More demonstrations were held throughout the country.

In Brisbane hundreds of protesters blocked the streets leading to 40 arrests.

Vans displaying anti-meat and dairy industry slogans were parked in Flinders and Swanston to hold up traffic.

What do you think of the vegan protests? Tell us in the comments section below!