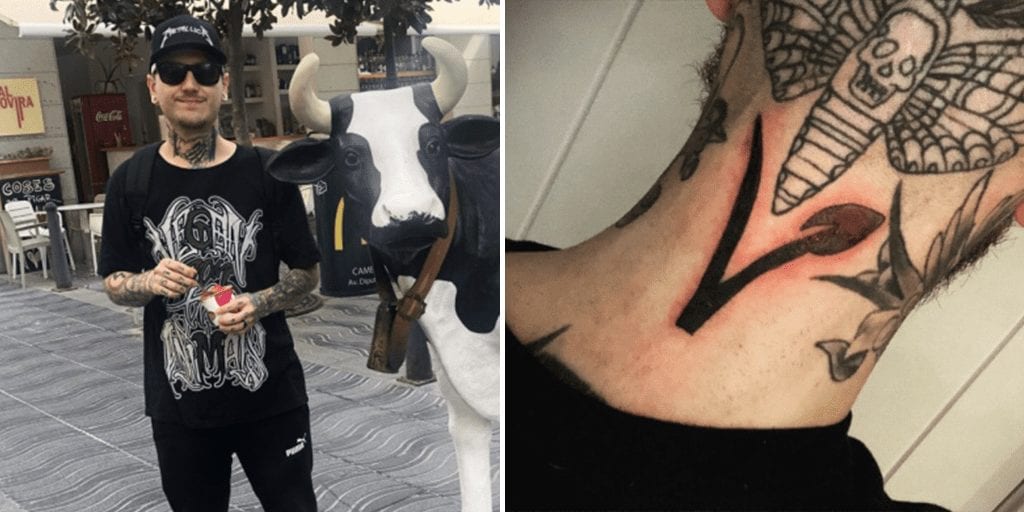 An Ipswich man has decided to get ‘vegan’ tattooed 100 times on his body to spread the importance of going plant-based.

Benjamin Patience lives in Ipswich town center and volunteers for a global charity group called Anonymous for the Voiceless that silently leads protests against the meat and dairy industry by screening footage of animals being abused on British farms.

Being a vegan for over a year, Patience decided he wanted to spread the message of veganism and intends to inscribe 100 tattoos of the word ‘vegan’ on his lower leg, reports the Ipswich Star.

Although he hopes to enter the Guinness World Records, his aim is only to educate people on the importance of ditching meat for health, environmental and ethical reasons.

“I’m going to do it regardless of whether the Guinness World Records approve it or not.

“No one puts a word on their body 100 times without a good cause and so I think it will get the message across of how important it is.”

He already has an iconic V for vegan tattooed on his neck.

Anonymous for the Voiceless

The animal rights organization was formed in 2016 to educate people on animal exploitation and support street activism that reaches out to people worldwide “with the aim of empowering the public to live vegan and speak up for animals”.

“We hold an abolitionist stance against animal exploitation and promote a clear vegan message,” reads the group’s statement on its website.

Recounting a horrible experience Patience faced during one of his Anonymous for the Voiceless protests, he said:

“The second time I went out with the group a woman threw a lit cigarette at me and was shouting and swearing abuse, she was clearly angry but it was scary.

“I think a lot of the public are confused about why people are going vegan, they have this idea that we’re all militant and want to force everyone to be vegan for our own purposes.

“But it’s not about that, we’re doing it all for the welfare of the innocent animals being harmed and killed everyday, the devastating impact it’s having on the environment and the benefits it has on our health.”

“A lot of people already agree with veganism, but they just don’t understand it. We are here to help people make that connection and go vegan,” states Paul Bashir, co-founder, Anonymous for the Voiceless on the website.

What are the other ways of promoting veganism? Share your ideas in the comments below!