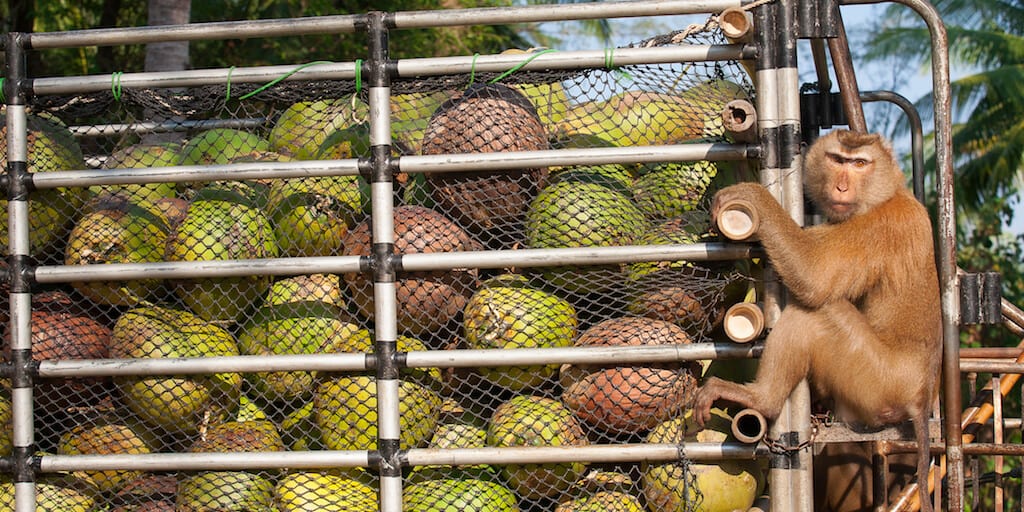 Vegan charity PETA led two investigations and found ‘the use of chained and caged monkeys in Thailand’s coconut-picking industry’.

The American supermarket chain no longer sells Chaokoh – one of Thailand’s most popular coconut milk brands – in stores and online. It joins other retailers including Target, Costco, and Kroger among others in removing the brand from its shelves.

The decision comes amid pressure from PETA, which said it conducted two undercover investigations into Chaokoh coconut milk and found “cruelty to monkeys on every farm, at every monkey-training facility, and in every coconut-picking contest that used monkey labour.”

Back in 2019 PETA Asia exposed eight coconut farms exploiting and abusing monkeys for the a major Thailand-based brand.

A follow-up investigation in 2020 found that many farms still employed monkeys to pick the fruit for the trade. The organisation also documented animal welfare violations at monkey coconut-picking competitions and monkey training facilities in the country.

The same year Chaokoh on its website  issued a statement that it had contracted a company to conduct a monkey-free coconut due diligence assessment.

Theppadungporn Coconut Co said it audited farms and found no evidence of monkeys being used for coconut harvesting.

However, PETA executive vice president Tracy Reiman said, ” one PETA exposé after another” have confirmed cruelty on Thailand coconut farms.

In a statement Reiman added: “The coconut trade uses social monkeys as chained-up coconut-picking machines, depriving them of any opportunity to eat, play, or spend time with their families.

“Kudos to Walmart for its kind decision.”

The organization is still lobbying Asian supermarket chain 99 Ranch Market that has over 54 stores across 10 states, to stop carrying the coconut milk brand.