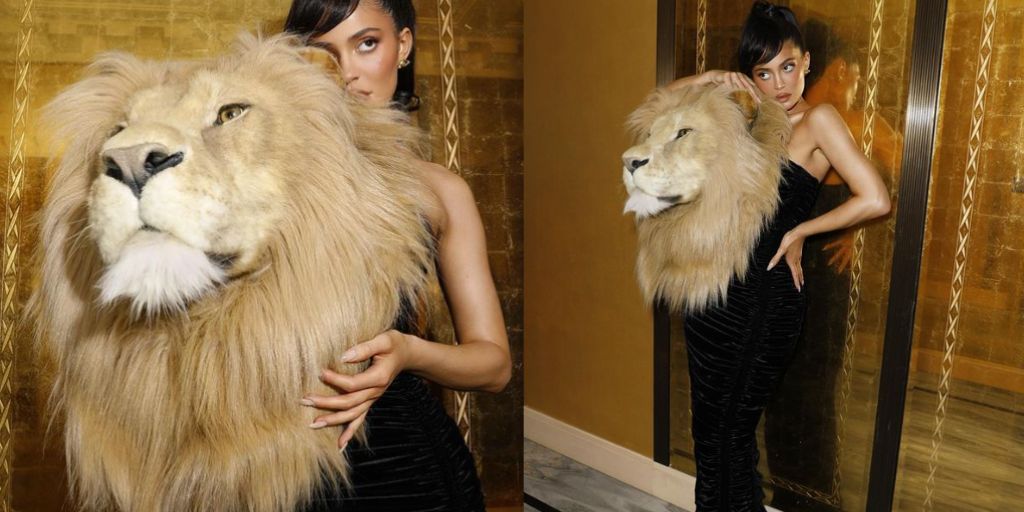 Reality star and beauty mogul Kylie Jenner made a shocking entry when she sashayed a furry haute couture promoting Schiaparelli’s collection that debuted at the brand’s spring/summer 2023 show.

While Naomi Campbell modeled a head of a wolf, Irina Shayk’s dress had a lion’s head and Shalom Harlow’s had a snow leopard.

Kylie Jenner sat front row at the runway event. She wore a black gown from the Italian fashion brand’s latest collection and also had an oversized life-like lion head on her torso.

According to the fashion house all head pieces were crafted from foam, resin, wool, and silk-based faux fur of which both wool and silk production have been associated with cruel industry practices and animal exploitation.

The collection was inspired from Dante Alighieri’s iconic allegory. The noted Italian poet, writer and philosopher of the 14th century penned a 14,233-line poem The Divine Comedy, in which the leopard, lion, and “she-wolf” symbolize lust, pride, and avarice.

The fashion house told CNN that the “faux-taxidermy” busts were meant to serve as a “reminder there is no such thing as heaven without hell; there is no joy without sorrow; there is no ecstasy of creation without the torture of doubt.”

Although thousands of people were quick to flock to the comment section of Schiaparelli’s and Jenner’s instagram to express their disgust in the new collection, vegan charity PETA hailed the fashion pieces   as “fabulously innovative.”

“Kylie, Naomi and Irina’s looks celebrate the beauty of wild animals and may be a statement against trophy hunting, in which lions and wolves are torn apart to satisfy human egotism,” PETA president Ingrid Newkirk said.

“We encourage everyone to stick with 100% cruelty-free designs that showcase human ingenuity and prevent animal suffering,” Newkirk added, urging Jenner and her fellow stars to “extend this creativity to exclude sheep shorn bloody for wool and silkworms boiled alive in their cocoons.”

The public sentiment begged to differ.

Famed photographer Misan Harriman, who has previously shot the cover of British Vogue, commented on Twitter: “Dear fashion industry, this is NOT the way to start the year. nope NOPE NOPE! Be better.

“Schiaparelli This is disturbing….. and yes I know no animals were hurt in this.”

“The only thing this is glorifying is the killing of these animals, even if this is fake,” one Instagram user added.

“The lion, cheetah and the wolf seem like they are literally meant to look as if they were killed and used for clothing. How is this celebrating the glory of the natural world? Make it make sense.”