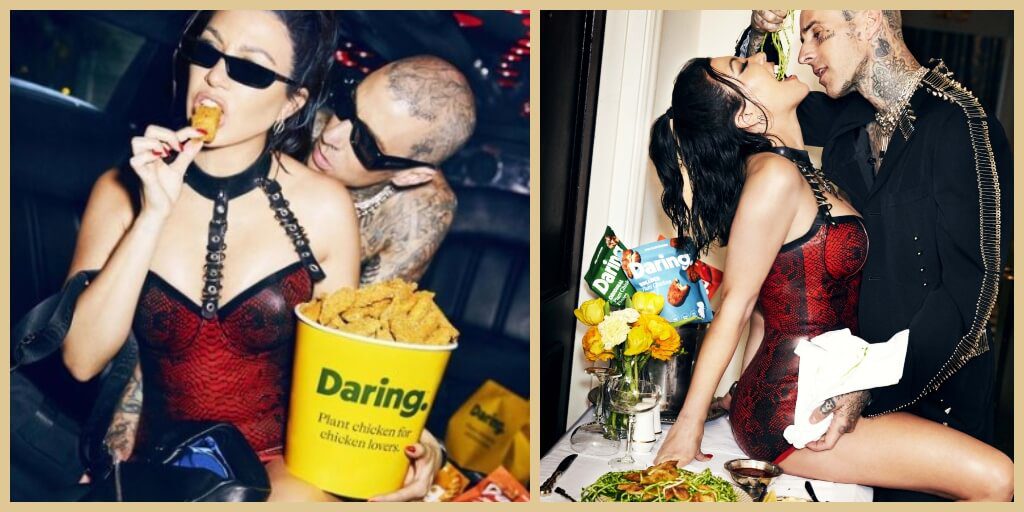 The couple shot a saucy seductive campaign showing how much they love each other and plant-based chicken.

She and husband Travis Barker are stars of a saucy new campaign for the brand.

The vegan newlyweds captured their love for plant-based products in a steamy photoshoot with iconic photographer Ellen von Unwerth at the Chateau Marmont in West Hollywood shortly after their Las Vegas elopement.

For the campaign, Daring developed four plant-based recipes for the couple to feast on while shooting the campaign.

The couple brought their usual steaminess and PDA to the shoot. In one shot, Kourtney is chowing down on Daring Plant Breaded Chicken in the back of a car, while Travis is hovering sultrily close to her neck. Another image has Kourtney perched on a table, with Travis feeding the “chicken” to her.

Kravis as they are popularly called will each be sharing the images on their social media handles.

Travis Barker has been vegan since 2009. He ditched animal products after surviving a plane crash.

“I haven’t eaten meat since I was 13 years old, so really good plant protein is important to me. Daring is awesome, because it’s super clean and has all-natural ingredients,” Barker said in a statement.

“When I went fully vegan 15 years ago, the options were basically straight vegetables, so I’m excited to see more plant-based choices on menus. That’s why I invested in Crossroads Kitchen and Monty’s and why this partnership with Daring felt so right for Kourt and me.”

For Kourtney – who has described her diet as 95% vegan in the past – partnering with Daring Foods is another step in her plant-based journey.

“I’ve been on a health and wellness journey for the past 13 years, which has made me super conscious of what I put into my body and my kids’ bodies,” Kardashian said.

“I’m not fully vegan, but Travis has helped me keep to a mostly plant-based diet, which is so much easier with Daring.”

Daring, which Ross Mackay founded in Los Angeles, California in 2018, is a vegan, gluten-free, and plant-based chicken alternative.

The product contains just five ingredients – at least 50% less – in comparison to some of its competitors that have a blend of 30 to 40 ingredients. It also is high in protein and lower in calories than its meat counterpart.

Daring Plant Chicken comes in four flavors — Original, Breaded, Cajun, and Lemon & Herb — and is available at various retailers nationwide including Whole Foods and The Fresh Market as well as online.

“From the moment our partnership with Kourtney and Travis began there was clear synergy between Daring’s mission and their personal beliefs on plant-based eating and the positive impact it has on the environment,” Mackay said in a statement.

“I could not be more proud to partner with them for Daring’s latest campaign and am grateful for their support and genuine love of our Plant Chicken.”