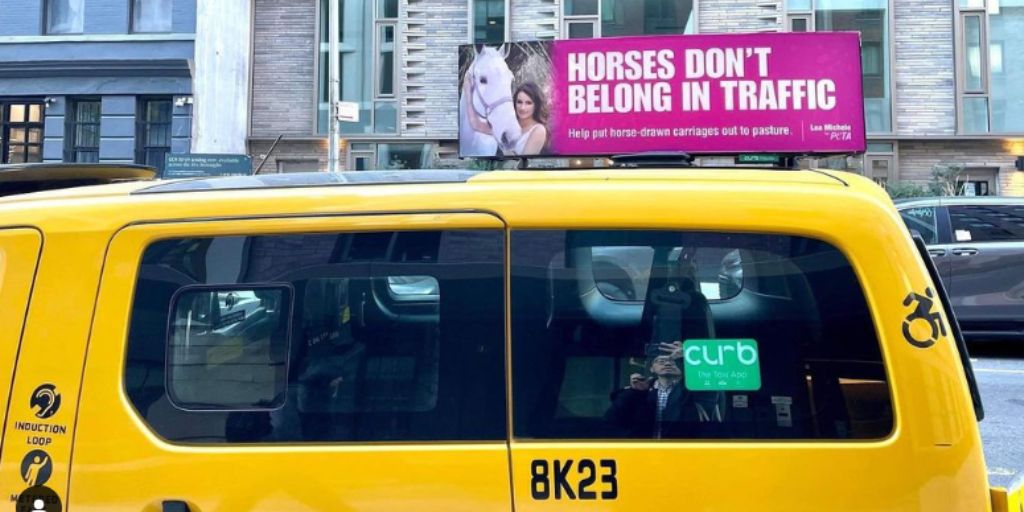 The Broadway star has joined forces with PETA to urge New Yorkers to boycott horse-drawn carriages.

The Broadway star is the face of PETA’s new ad campaign, which urges people to ‘ get horses off busy #NYC streets!”

The charity, along with a large and diverse coalition, is calling for city legislation to ban horse-drawn cruelty.

According to PETA, laws regulating the carriage trade have long failed horses, many of whom have suffered and died.

Moreover, it claims that New York City’s police and health departments don’t have the resources or inclination to monitor the conditions under which the horses are made to work on a routine basis or make sure regulations are being followed.

Meanwhile, carriage operators fight and flout every rule put in place to protect the horses and the public.

Ryder and ilk tortured in the industry

In August 2022, an emaciated horse named Ryder collapsed on 9th Avenue in New York City. The elderly equine was being forced to pull a carriage in the brutal summer sun.

Footage of Ryder after he collapsed showed  that he lay unattended for over an hour—with no veterinary care— while his driver slapped him, whipped him, and screamed at him to get up.

Sadly, Ryder died on 17 October.  The unfortunate incident led New York City Council member Robert Holden of District 30 to introduce Ryder’s law in a bid to phase out and ban horse-drawn carriages in the city and replace them with horseless, electric carriages.

The legislation is currently referred to the Committee on Health.

“PETA is pushing for a ban on horse-drawn carriages and asking compassionate New Yorkers and tourists to say neigh to carriage rides.”

PETA has  launched a petition to urge New York City Council Speaker Adrienne Adams to lead the council to ban horse-drawn carriages without delay.  More than 100,500 PETA supporters have added their signatures.