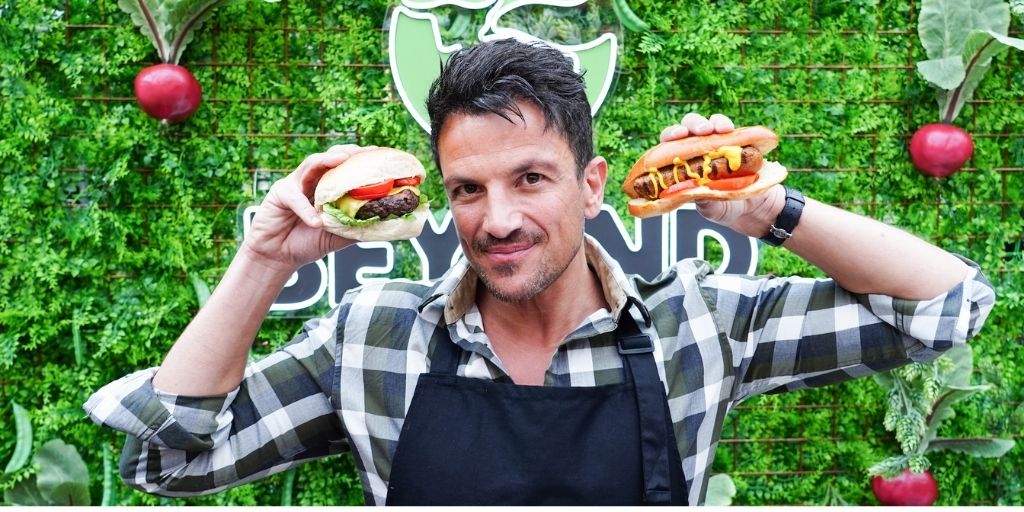 “Their burgers sizzle on the grill and taste amazing. It’s as easy to cook as animal meat, and is better for the planet. Beyond Meat makes it incredibly easy to live a flexitarian lifestyle.”

Flexitarian Peter Andre has taken centre stage in Beyond Meat’s BBQ Beyond campaign, which aims to show how people can make bbqing a breeze using plant-based products.

The campaign has the 49- year-old singer team up with a group of barbecue experts to share their top tips on how to make the most of the Beyond Meat plant-based range in summer.

It follows a survey conducted by the plant-meat brand which revealed that more than 50% of people struggle to know what to BBQ for guests who don’t eat animal meat.

More than a third (36%) assumed that plant-based meat was just for vegan and vegetarian guests, and almost a fifth (17%) of Brits didn’t even realise they could BBQ plant-based meat.

The research also showed that over 1 in 3 (37%) of the UK said they plan to BBQ plant-based meat this year – explaining that it’s delicious on a BBQ (38%) and a more sustainable option compared to animal meat (43%).

“The survey highlights Brits are in dire need of barbecue upskilling,” Bram Meijer, marketing director EMEA at Beyond Meat said.

“We want to show the UK how easy and delicious it is to grill plant-based meat [alternatives] this summer and share tips on how to create the best barbecue experience.”

Peter Andre, who calls himself a proud flexitarian revealed that he and his family try to eat plant-based food at least three times a week.

Visibly impressed by how good and realistic Beyond Meat’s range tastes, the Mysterious Girl hitmaker – who hosted the launch of the campaign – was seen getting behind the grill to prepare his signature burger, complete with a juicy Beyond Meat patty, caramelised onions, beetroot, plant-based mayonnaise and cheese plus optional pineapple.

“I’m delighted to be teaming up with Beyond Meat to inspire more people to put plant-based meat on their BBQ this summer,” Andre said.

“Their burgers sizzle on the grill and taste amazing. It’s as easy to cook as animal meat, and is better for the planet. Beyond Meat makes it incredibly easy to live a flexitarian lifestyle, something which myself and my family are a huge believer in.”

Beyond Meat wants to inspire more people to go flexitarian

This campaign is just one of the many endorsements recently launched by Beyond meat to encourage more meat-eaters to swap out meat products for plants since 70% of its customers are actually meat-eaters.

Earlier this month, Beyond Meat and comedian Kevin Hart released a commercial, encouraging people to try plant-based burgers for the planet.

“Traditions keep us connected to our past, but we have to make decisions for our future,” Hart says in the commercial.

“We’ve gotta go beyond tradition, make changes that are better for the planet.”

“Sometimes we don’t look for the most obvious things we can change, and I don’t know why. Some things should be easy, like eating Beyond Meat. Changing the world one burger at a time.”

She joined Beyond Meat as the company’s first Chief Taste Consultant.

“I’ve been focusing on going more plant-based and can tell you that Beyond Meat is my absolute favourite – I love how all their products not only taste amazing but are also good for me and my family,” the 41-year-old said in a statement.

Share this story: Peter Andre and Beyond Meat team up to promote plant-based BBQ this summer.