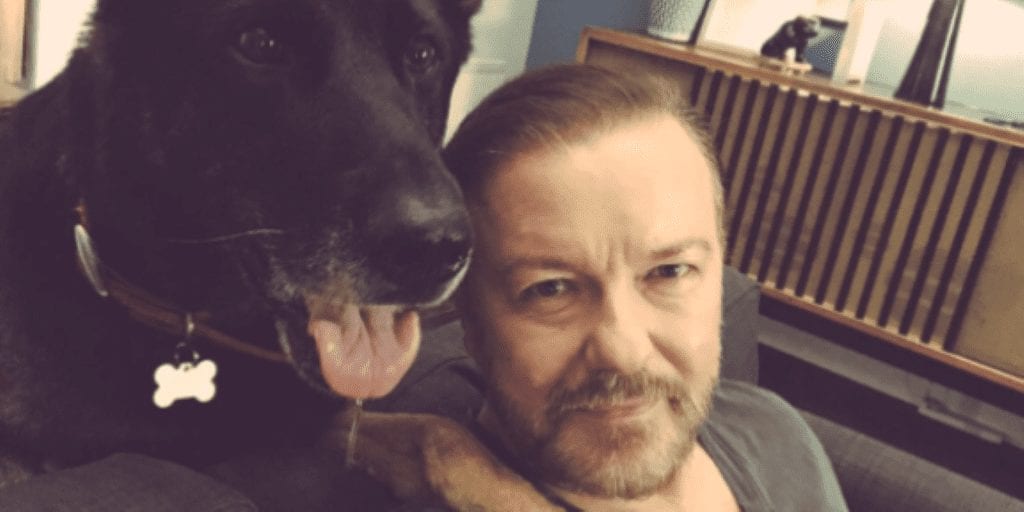 Ricky Gervais has been making us laugh, cringe and most recently even cry with his huge variety of performances since The Office debuted in 2001. But in recent times the comedian, writer and actor has been increasingly using his huge online presence to promote animal welfare.

Eighteen years ago Gervais introduced self-promoting, deluded and downright embarrassing office manager David Brent to our screens, and few would have predicted the journey his career would follow thereafter.

Following successful stints in stand-up comedy – and writing, acting and directing critically acclaimed shows such as Extras – Gervais once again showed a new side to him in Netflix series After Life this year.

He plays Tony, a man coming to terms with the death of his wife, who claims the only thing that keeps him going is the relationship with his dog.

Gervais, who co-wrote the smash-hit show, has reflected the character’s compassion for dogs with posts on Twitter.

He’s also encouraged his fans to adopt rescue dogs from shelters rather than choose a breeder.

After Life is set for a second season following the show’s incredible success, and Gervais even reassured views that his now famous dog would make it through.

Gervais has been rumoured to be vegan for many years. During the show his character is pictured eating fish and chips, but Gervais explained the meal was vegan.

Gervais has also used his platform to advocate for animal welfare on a huge variety of topics. This week he condemned horse racing after three horses died at the Grand National.

Last month he launched into a hilarious rant about the hysterical reaction to the launch of the Greggs vegan sausage roll.

And just one week before, he launched into an explosive rant condemning animal testing on live radio.

What do you think of Ricky Gervais’ tweets? Tell us in the comments section below!