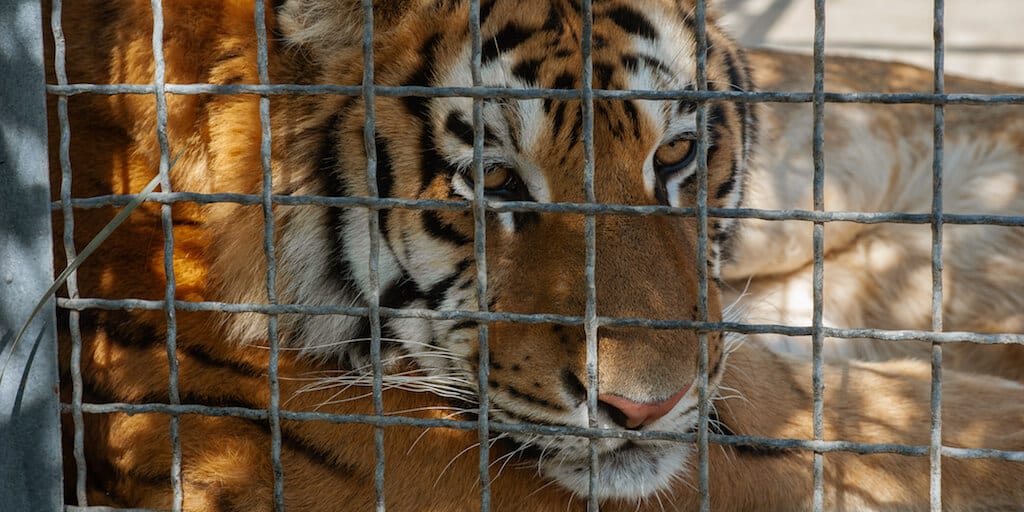 The clip shows an agitated tiger biting and clawing the trainer.

A horrifying video of a circus trainer being attacked by a tiger has gone viral on social media. This is yet another incident that exposes how wild animals suffer and lash out when kept in confined conditions.

The terrifying incident took place at the Marina Orfei Circus in the province of Lecce, Italy.

The attacked trainer was trying to instruct a tiger perched on an elevated platform when another emerged into the ring and pounced on his leg.

The agitated tiger dragged Ivan Orfei, a few feet away from the frame and started attacking  his neck and other body parts.

Orfei shrieked in pain and struggled to free himself from the tiger’s clutches, for a few agonising seconds until his assistant stopped the attack by disengaging the tiger by using a table to fend the feline away.

Ivan Orfei, 31,lion tamer had been concentrating on another cat sat on a giant metal ring, when the second tiger sneaks up and pounces on his leg. pic.twitter.com/fEzw3KOEqr

The injured trainer limped away and was rushed to Lecce’s Vito Fazzi Hospital for medical attention.

He has reported to have suffered deep wounds to his neck, leg, and arm.

The video has been viewed thousands of times and has received a lot of reactions.

“I’m sorry for him but they know the risk. They want to cage living beings, they have to deal with when they rebel. F**king circus,” wrote one Twitter user.

“Man I’m so sorry, but why keep doing the circus with animals…” added another.

Following the incident, the circus management issued a statement: “Ivan, a highly skilled professional trainer, was hit by a tiger during the show and luckily suffered minor injuries and his condition is of no concern.”

The management added: “Beyond the prejudices, insults and falsehoods that are read around, ours is a world made of great love for animals, just as Ivan himself demonstrates to the audience in his shows.

“Tigers are fascinating animals and knowing how to tame them and build a trust relationship with humans is an art that has been happening not only in the Circus world for hundreds of years.

“However, an accident can happen and the courage shown by people like him who carry out this job is commendable. Ivan is wishing a very soon return to the track, alongside his family and animal friends.”

The International Organisation for the Protection of Animals (OIPA) said incidents like these are proof that a national law banning circus acts involving wild animals should be put in place.

OIPA has been pushing various governments to reform the law on the use of animals for public entertainment.

“Behind the exercises of the circus show hides months of deprivation, mistreatment, and suffering. It is no wonder that episodes like this happen,” OIPA president Massimo Comparotto said in a statement.

“Animals that perform in circuses live in captivity behind bars, with limited space available, and perpetually under stress. They live a life opposed to their nature and sometimes they rebel.

“What happens to the animals that attack the circuses? What is their protection?”

Share this story: Tiger attacks circus trainer and bites him during a live performance in Italy.