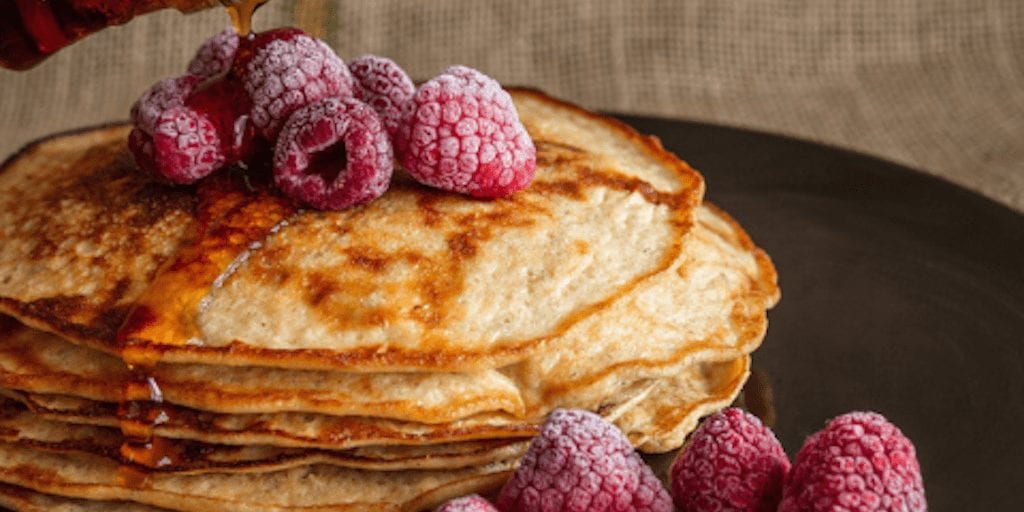 Pancakes usually contain eggs, making them decidedly non-vegan. But as with other baked goods, it’s possible to substitute out the animal ingredients and make them plant-based.

A decade ago, satisfying your cravings for vegan pancakes would probably have meant making your own. But as plant-based eating continues to grow in popularity, more and more options for eating out are springing up.

If you’re in London then you’re especially lucky, because there are so many amazing vegan cafes and restaurants around. Whether you’re looking for pancakes for brunch, Pancake Day, or a special occasion, here are 17 amazing places in the capital where you can find them.

Already well-known for her plant-based food blog, product range, and highly successful cookbooks, Ella Mills of Deliciously Ella has now opened a chain of delis in the capital. At her Weighhouse Street branch, the breakfast menu features blueberry pancakes. They come drizzled with maple syrup, along with granola and fruit compote. Just be sure to arrive before 11 a.m. (or 12 p.m. at the weekend), to make sure you’re not too late to enjoy them.

Osu Coconuts sell both sweet and savoury vegan pancakes. They are all made with coconut water and free of gluten, dairy, and eggs. They also don’t contain any refined sugar, and come in delicious flavour combinations such as Apple Crumble, Cocoa Power and Berry Mad. The pancakes can be topped with whipped coconut cream, salted caramel sauce, and fruit.

This colourful vegan restaurant in Fitzrovia has an all-day menu which includes buckwheat and banana pancakes. Since buckwheat is not actually wheat, these pancakes are gluten-free as well as vegan. The pancakes come with some yummy toppings – caramelised bananas, coconut yoghurt, and almond brittle.

Kalifornia Kitchen is open every day except Monday, from 11 a.m. to 10 p.m. (with the exception of Sundays, when it closes at 7). Find the restaurant at 19 Percy Street, London W1T 1BZ.

Fancy something a little healthier? Essence Cuisine is a mostly raw vegan restaurant in Shoreditch, created by plant-based American chef Matthew Kenney. If you go for the all-day brunch (served until 5 p.m.), you can try the raw coconut banana pancakes. They come with berry salad, vanilla coconut cream, mint, and candied walnuts. They’re also gluten-free, making them ideal for those with coeliac disease, a wheat allergy, or gluten intolerance. Find them at 94 Leonard Street, London EC2A 4RH.

Most of the food at Farmacy is organic and free of additives, as well as 100% plant-based. Pancakes are available at the restaurant if you get there in time for breakfast or brunch. They’re made with buckwheat, so they’re gluten-free too. The pancakes come with maple syrup, fruit, caramelised pecans, and coconut yoghurt. Those with nut allergies can order them without the pecans.

The Gallery Cafe is a vegan eatery in Bethnal Green. It’s a not-for-profit community-oriented cafe run by the organisation St Margaret’s House. The cafe tries to use mainly local ingredients for its dishes.

Its breakfast menu includes pancakes with a wide choice of toppings – classic sugar and lemon juice, chocolate sauce, apple and cinnamon, or peanut butter and banana. But make sure you get there before 12 p.m. (or 1 at the weekend) so you’re there in time for breakfast! Find The Gallery Cafe at 2 Bastion Highwalk, London EC2Y 5AP.

Black Cat Cafe in Hackney is not just vegan but also a not-for-profit co-operative, giving it top marks for ethics! Though its dishes change frequently, its regular menu includes a savoury pancake. It’s made with chickpea flour, and inspired by Spanish omelettes. The pancake contains lots of roast veggies and fresh herbs.

The cafe also offers a vegan fry-up for brunch, where you can opt for a pancake instead of toast. Find the cafe at 76 Clarence Road, London E5 8HB.

8. Where the Pancakes Are

Though Where the Pancakes Are is not a vegan restaurant, plant-based eaters can request that their pancakes are made with its “three-in-one” batter. This batter is also gluten-free, as it’s made with a mix of buckwheat and rice flour. It uses aquafaba (chickpea water) instead of eggs, and soya milk instead of dairy.

There’s a vegan breakfast pancake on the menu, and many of the vegetarian options can be made vegan by omitting the animal ingredients. These include the Simple, Forest Berries, and Hummingbird pancakes. The savoury 1000 Baby Greens pancake can also be made vegan. Find the restaurant at Flat Iron Square, 85 Southwark Bridge Road, London SE1 0NQ, UK.

This self-service vegetarian restaurant is special because you pay by weight – so you can eat as much or as little as you like. At breakfast, you can help yourself to pancakes with three different topping options – raspberry, banana, and walnut, blueberry and coconut yoghurt, or strawberry, mango, and almond. As if that wasn’t enough, you can also choose to pay a little more for extra toppings such as coconut flakes or dried apricots.

By Chloe is a vegan fast food chain from the USA, which is now making waves in the UK after opening two branches in London.

Pancakes are served until 4 p.m. at the weekend as part of its brunch menu. The pancakes come with maple butter, and you can choose to pay a little extra for coconut-based whipped cream.

Find branches of By Chloe at Drury House, 34-43 Russell Street, London WC2E 8BE and One Tower Bridge, Tower Bridge Road, London SE1 2UP.

Based in Hackney, WAVE is a new vegan cafe with both sweet and savoury vegan pancake options. Its name stands for We Are Vegan Everything, and it was started by the same team which runs Cupcakes and Shhht, a vegan bakery.

All its pancakes are gluten-free. The sweet option is blueberry pancakes, which come with banana, syrup, and Oatly cream. The savoury option is smoked maple tempeh pancakes, which are served with a scoop of dairy-free ice cream. Find the cafe at 11 Dispensary Lane, Mare St, London, E8 1FT.

My Old Dutch is a small chain of restaurants which is dedicated to pancakes. Though many of its offerings are not vegan, there are some options for those on a plant-based diet. The pancakes can be made with soya milk rather than cow’s milk, and there’s the option to choose from a range of toppings to make your own custom pancakes. Savoury toppings include a range of vegetables, hummus, salsa, olives, and even fruits like apple and pineapple. Sweet options include fruit, sauces like maple syrup, spices like cinnamon, and chopped nuts. The chain has three locations – Kensington, Holborn, and Chelsea.

The Diner is a small London-based chain of American-style diners. At four of its locations – in The Strand, Dalston, Shoreditch and Spitalfields – it has been offering a vegetarian and vegan menu since 2017, in response to changing dietary trends.

As part of its all-day breakfast menu, you can choose from vegan pancakes with four different kinds of topping – chocolate and fresh strawberries, maple syrup, blueberry compote, or banana butterscotch sauce.

The Breakfast Club has branches all across London. Though it’s not generally the most vegan-friendly of locations, it does offer a vegan blueberry pancake. The Beauregard pancake, as it’s known, also doesn’t contain gluten. It’s served with oat cream, maple syrup, and a blueberry and lemon compote. The breakfast menu is available until 12.

The Breakfast Club’s locations include Canary Wharf, Soho, and Battersea, to name just a few. Do a quick search to find out where your nearest branch is.

Located in Fitzrovia, Kin Cafe is run by a father-and-son team who try to keep things interesting by frequently changing up the menu. They also aim to stick to some strong ethical principles, like sustainability and supporting small local businesses. All the food at Kin Cafe is vegetarian, and there are lots of vegan options. This includes their vegan and gluten-free pancakes, which come with fresh fruits, coconut oil, agave nectar, and mixed seeds. Find them at 22 Foley Street, London W1W 6DT.

Wulf and Lamb is a much-loved all-vegan restaurant in Chelsea. Its Rise and Shine breakfast and brunch menu, served from 8 a.m. every day (9 a.m. on Sundays), offers fluffy American-style pancakes which come in a classic stack.

Though the ordinary crepes at Crepeaffaire aren’t vegan, the galettes are – and they’re also gluten-free, since they’re made with buckwheat. There are three choices of vegan topping – plain chocolate, Cheeky Monkey (banana and chocolate), and strawberry and chocolate. There are also three savoury vegan options – spicy chick’n (made with Tofurkey), barbecue chick’n, and the Super Vegan, which contains mushrooms, tomato, spinach, and vegan cheese.

Find branches of Crepeaffaire in Islington, Stratford, Wimbledon, and several other locations around the capital.

What’s your favourite place to get vegan pancakes in London? Let us know in the comments. 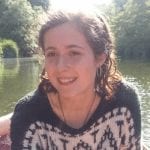 Bethany Chester is a freelance writer and the editor of Seedling, a free online vegan magazine. She also blogs on her site, Little Green Seedling. When she’s not writing, she loves yoga, meditation, reading, and spending time in nature.

Bethany Chester is a freelance writer and the editor of Seedling, a free online vegan magazine. She also blogs on her site, Little Green Seedling. When she's not writing, she loves yoga, meditation, reading, and spending time in nature. View more posts