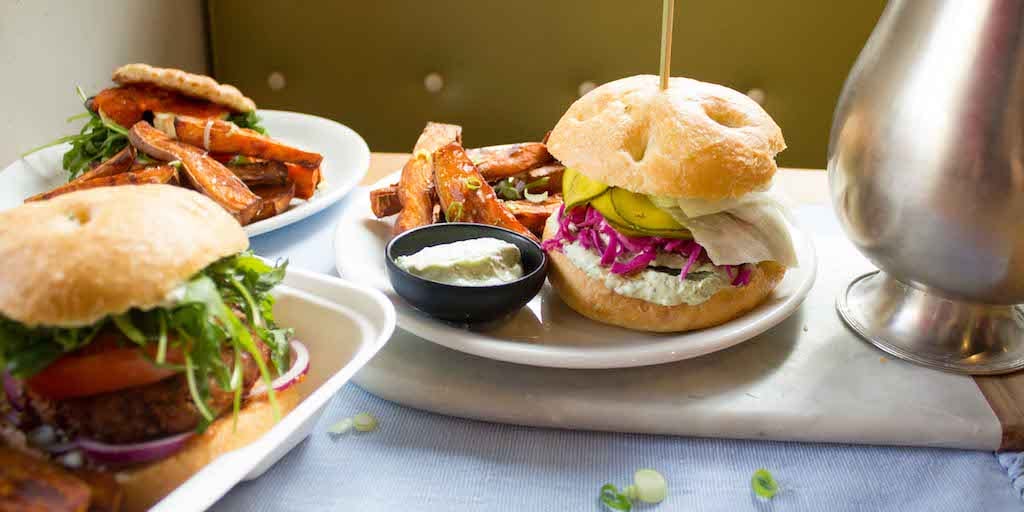 Head to Mildred’s in Dalston to experience possibly one of the most life-changing burgers of all time. The restaurant is one of the proud stockists of the incredible Moving Mountains B12 Vegan Burger, which has been engineered to closely mimic a beef patty, even ‘bleeding’ (beetroot juice) when cut open. As the name suggests, it’s ingredients are deliberately rich in B12: so not only will it keep those pesky Omni questions about B12 at bay, this burger is actually good for you. You won’t look back – it may even sway your non-vegan mates over to the V-gang…

Okay, so we’re cheating a bit here: this exclusively vegan East End burger bar offers four absolutely spectacular vegan burgers, and frankly, we can’t decide which one rocks our world the most. Choose from pulled BBQ jackfruit, ‘fillet-om-phish’ (that’s nori wrapped battered aubergine), quinoa & black bean, or chick pea, green pea & spinach patties – and load up on the sides! We highly recommend their guacamole with plantain crisps: fried and gone to heaven much.

Boasting two restaurants as of quite recently – Camden and Hackney – Temple of Seitan deserves a visit from you for the genius wordplay alone. Even better though, this revolutionary fast food joint has harnessed the vegan power of seitan to bring a kebab shop-cum-chicken-shack-cum-burger joint to life. All the vibes of KFC without the monstrous brutality behind the menu. We especially love their Temple Spicy Burger because we’re suckers for chipotle vegan mayo and sriracha in the same mouth-watering bite.

This place could be one of our favourites – what herbivore doesn’t shed a tear of joy at the words ‘vegan brioche’? A super hip ambience in Shoreditch, Vurger Co’s vegan burgers are probably the most instagrammable we’ve seen. That is, if you can resist demolishing yours before you’ve opened your camera app. We’re all about their MLT, a mushroom and barlotti bean with walnut pesto. This is what it must be like to be a drooling Homer Simpson.

This plant-based godsend is what the acronym OMFG was invented for. Just a year into business, Biff’s Jack Shack is actually a kitchen takeover at East London’s Haunt bar. It’s attracted some see-rious media attention, not least the thundering sound of vegans running over the hills to try it out for themselves, and as the name suggests, their burgers (and no-chicken ‘wingz’) are all made from jackfruit. But when it comes to choosing the best burger off the menu? We have no issue with the fact we might have to work our way through each of the five varieties again, just to check. Just so goddam good.

Omni-rable mentions…
And lest we forget to mention a few omni-friendly London burger bars: Camden’s Cut and Grind Burger serves a rockin’ miso aubergine burger; Patty & Bun (various locations – each has a different menu, so make sure to check) cook up a stonkin’ tempeh and mushroom creation they call the ‘Whoopi Goldburger’; and Byron Burger (again, various locations) have recently launched a downright delicious vegan option they call their ‘Beetnik’. Check ‘em out!

Over to you – what’s your favourite vegan burger in London? Leave us a comment below!

Before she's anything, Plum Phillips is vegan (for the animals and the planet in equal measure). But when she's not chowing down on pure plant power, she's a writer. Her writerly background is in general wellness and lifestyle topics, but here on Totally Vegan Buzz she veganised her contributions for current affairs, humour and a bunch of quizzes.