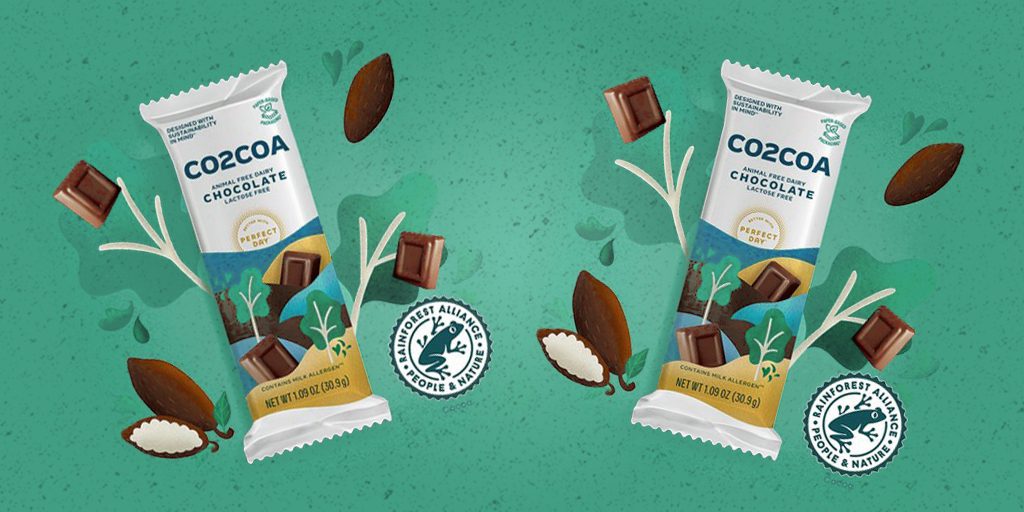 “At Mars, we bring our consumer-passion to innovation, developing on-trend innovations that support a world where both people and the planet thrive.”

Mars has just released its first vegan milk chocolate bar in the US.

The confectionary giant has partnered with Perfect Day, Inc., to launch CO2COA – an earth-friendly and animal-free chocolate innovation.

The food technology company supplied the animal-free whey, an ingredient that gives the new vegan bar the same silky-smooth taste Mars’ fans have come to associate with popular products, including Dove, Milky Way, Snickers, and M&Ms.

Perfect Day uses a precision fermentation process  to  develop the world’s first nature-identical dairy protein, without the use of animals. The technique uses up to 99% less water and produces up to 97% fewer greenhouse gas emissions than traditional dairy.

The cocoa for the chocolate is supplied by Rainforest Alliance Certified sources.

According to Mars, the name of the chocolate bar – CO2COA- is a homage to its mission of cutting carbon emissions from its products. Moreover, the sustainable chocolate will also be packaged in 83% paper-based packaging in line with the brand’s environmentally friendly mission.

“There’s alternatives in the marketplace that are plant based, and what we’ve seen is by incorporating the Perfect Day material, it really mimics the smooth, silky texture that consumers look for,” Chris Rowe, Global Vice President of Research & Development at Mars Wrigley said.

“That’s a big differentiator because this has both the flavor and the texture of chocolate products.”

Rowe added that this bar was developed in just under a year indicating that the company is keen to push into new categories.

“At Mars, we bring our consumer-passion to innovation, developing on-trend innovations that support a world where both people and the planet thrive,” he said.

“The creation of CO2COA is an inventive example of how we partner with technology innovators, like Perfect Day, to bring great new offerings to our consumers. We’re excited to collaborate with Perfect Day and continuing to explore the potential of alternative proteins to help create a more delicious and sustainable future.”

The chocolate will cost $2.39 per bar and will be sold through the CO2COA brand website. The company is launching the bar online to gain feedback from consumers. The company may decide on a wider rollout of the bars at retail stores depending on reactions.

Although this is Mars first US vegan chocolate bar, the confectionary giant has launched five plant-based versions of its famous Galaxy chocolate bars in the UK.

Last year the company followed it up with the debut of vegan version of its iconic Topic, Bounty and Milky Way Magic Stars chocolate bars.