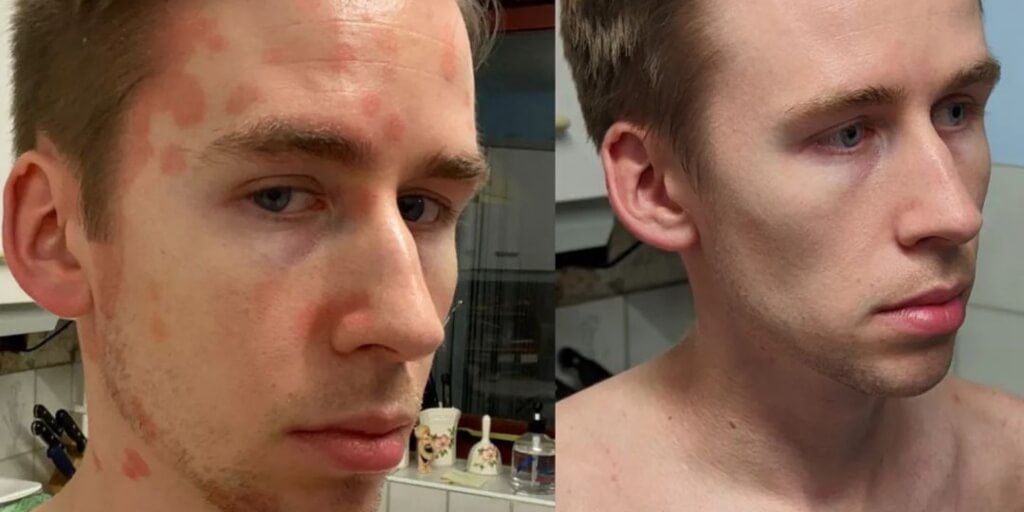 “I can’t wait to be with friends and to just feel good in myself, knowing that I am healthier and happier inside and out.”

A 27-year-old says adopting a plant-based diet has helped him reverse his ‘severe’ psoriasis after the skin condition forced him to become a ‘hermit’.

Scot Cunningham, who enjoyed spotless skin throughout his teens began to suffer with mild psoriasis – a skin condition that causes flaky patches of often scaly skin – on his arms and torso after he turned 21.

The Arts Council officer started managing the flare-ups with steroid creams but had no idea of how severe the condition would become over the years.

Cunningham first noticed the rashes in 2017 while studying for his Masters in radio and TV script writing at The University of Salford, the Independent reported.

“I had just moved to my student accommodation and climbing out of the shower I noticed two or three red patches on my torso,” he recalled.

“I just assumed that it was the generally grimy environment that caused my skin to react.”

He was prescribed steroid creams that alleviated his condition initially. “The creams worked, but when I look back, I think they only masked the problem rather than actually dealing with it,” he said.

“I got into the same old cycle of using the steroid creams when my skin was bad for two weeks, watching the marks fade, then using normal moisturiser for two weeks. Then my skin would get bad and I’d use the creams again.

“It was a vicious cycle, but at that point, it was just a minor inconvenience.”

More flare-ups and no relief

However, last October, Cunningham, nursing a throat infection at the time, woke to find his entire body and face covered in hideous and itchy red patches which would not go away with any topical steroid cream.

“There were dozens of these raindrop size pink scales all over me. I was really scared. I had no idea what had happened.”

Cunningham headed to the GP and was diagnosed with guttate psoriasis – a skin condition which causes small drop-shaped sores on the chest, arms, legs and scalp.

He was prescribed more steroid creams, but none eased his condition even slightly and soon Cunningham was running out of options.

“The creams seemed to stop working, but whenever I saw anyone, they would just say they were my only option,” he said.

“I had always felt grateful of my youthful looks and I’ve always got attention on dating apps, but I started to lose all my confidence.

“I had this horrific sense of dread every time I looked in the mirror – I looked awful. I felt totally dejected and completely hopeless.”

By the beginning of 2022, Cunningham’s self-esteem plunged so low that he started avoiding all social gatherings and even stopped going out altogether after the sores started to spread to his face.

“I turned off my camera during team meetings at work and I stopped organising to meet with friends, because I didn’t want them to see me.

“If I had to go to the supermarket, I could see all the kids staring at me and it made me feel awful.”

The urgent treatment centre at Manchester Royal Infirmary advised him to try private light therapy but faced a 60-week waiting list on the NHS.

Finally, after all the prescribed medicines failed, Cunningham decided to take matters into his own hands.

He said: “It got to April and I thought, ‘I can’t be dealing with this anymore.'”

He began researching about his condition and sought advice from fellow sufferers on skin forums.

Eventually, Cunningham started making changes to his lifestyle, beginning with his diet.

“Before I started this, I never ate much fruit or vegetables. I just lived off ready meals – mainly pasta and chicken dinner ones – and anything chocolatey I could get my hands on,” he said.

“I started with an apple, cucumber and celery juice cleanse from the natural skin care company, Hanna Sillitoe, for three days and then started making dairy-free, meat-free and gluten-free soups and dinners.”

He added: “I had things like apple and beetroot soup, parsnip and carrot soup or pea risotto and mushroom meatballs.”

He also started supplementing Vitamin D3, Zinc, Omega3 and magnesium, as well as exploring plastic-free moisturisers. He opted for a non- steroidal topical cream for £19.99 for his face and coconut oil and turmeric essential oil for his body.

With his new regime, Cunningham gradually started witnessing improvements to his skin. “I hit about a month in and the patches were starting to finally get smaller and less red,” he said.

He added: “Every day, I had been improving and being in the sea and taking time away, by the end of the 10 days, my face and body looked almost clear.

“I couldn’t believe it – I felt incredible.”

Although Cunningham occasionally indulges in some white meat and fish he still continues to eat a predominantly plant-based diet.

“It has been life-changing,” he said.

“I can’t wait to be with friends and to just feel good in myself, knowing that I am healthier and happier inside and out.”

Share this story: 27-year-old reverses psoriasis on a plant-based diet after steroids failed to treat his condition.