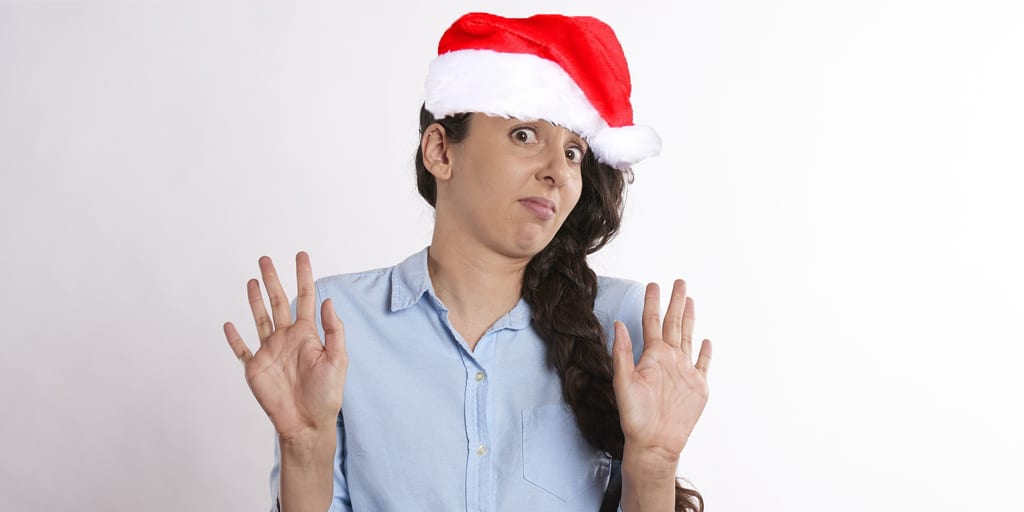 In our largely secular society, Christmas has pivoted from a solemn remembrance of the birth of a 2000 year old baby to an excuse for acceptable gluttony. Christmas (and to a lesser extent, its weird American cousin “Thanks Giving”) is the time of year when we get together with our loved ones to perform group sadomasochism on our intestinal tracts while our brains liquefy and leak out of our ears from overexposure to sleigh bells and minor-seventh-flat-five chords. As it’s a time of tradition, it has also become the temporal prison to which we have relegated the least palatable foods, so that by the time another year has passed and December rolls around, we’ve forgotten just how disgusting they are. Christmas is where the smelliest, driest, lukewarmest, congealingest foods not only survive but thrive. But you, my friend, have an excuse not to partake: you’re vegan. So here is your survival guide to the very worst the season has to offer, and what to eat instead.

The turkey, when alive, is a sort of extremely buff chicken. Quite rightly, they are aggressive towards humans, perhaps knowing that by and large, we wish them nothing but harm. Eating turkey at Christmas became a tradition in Britain in the 17th century (although the working classes more commonly ate goose until the Victorian era.) Over 7 million turkeys were eaten in Britain on Christmas Day, 2009.

While the majority of meats are highly pungent (especially to the sensitive nostrils of the vegan), the corpse of the turkey is an uncommonly malodorous thing. It smells – and it brings me no pleasure to make this comparison – positively flatulent. And yet, it is gobbled with relish by the unenlightened masses, not just on the day itself, but for weeks before and afterwards in the form of leftovers and pre-packaged sandwiches. The entire month of December smells of death, rot, and irritable bowels, all thanks to this one meat. This Christmas, please have mercy – not just on the turkeys, but on the noses of those around you.

What to eat instead: Nut Roast

What is it we look for from a roast dinner? There must be crispiness and crunchiness, yes, but moistness and density are equally important. We want bold, unctuous flavours, and a variety of textures. Enter: the nut roast.

I know – it sounds boring. It sounds like the mid-’70s writing staff of Saturday Night Live invented it as something a dumb hippy would eat. But don’t knock it until you’ve tried it, daddy-o. Done right, it’s truly delicious, and is the perfect alternative for the meat portion of a roast dinner. (I recommend this recipe, which has been satisfying my family for more than a decade.)

But after all, this is Christmas, isn’t it? Your everyday nut roast just isn’t going to cut it. Enter: the chestnut en croûte. Swap out the mixed nuts for that Christmas staple, chestnuts, season it with sage and thyme and all those other fancy herbs nobody uses the rest of the year, wrap it in puff pastry and bake the living daylights out of it. Thank me later.

Cheese, next to bacon, is one of the most frequent foods mentioned in those “I could never go vegan” conversations we never initiate yet somehow always end up in. I’m not going to go on the attack against cheese here – obviously, like all dairy products it’s cruel and not very healthy – but I can’t be opposed to the mere concept of it, or else I wouldn’t eat vegan cheese, which I do with gusto.

But for one category of cheese, it wasn’t enough to just be ideologically gross – it had to be just gross by its very nature. I speak of course about blue cheese, and particularly Stilton.

Growing up, my stepfather, an alcoholic who barely ate most of the year, would buy himself a wheel of Stilton every Christmas. When the big day came, he would whip it out and dig in, filling the entire ground floor of the house with the stench of gangrenous feet. Inevitably I would run off upstairs, ideally slamming a door on the way to express my disapproval at being forced to endure such torture.

One such Christmas, as my stepfather enjoyed his cheese, my mother looked closer at the wheel to find it was crawling with live maggots, causing her to uncontrollably gag, while he seemed content simply to spit it out and carry on with his life. They’re divorced now.

What to eat instead: Vegan Cheese

As comedian Gary Gulman says in his 2019 stand-up special, The Great Depresh, it’s the best time in history to be both mentally ill and vegan. One need only look at the advances in vegan cheese to know that the latter is definitely true. Not only do we have several widely available alternatives in all the major supermarkets, many smaller companies are now making high-quality artisanal vegan cheeses, which can be found in health food shops and ordered online. Is it exactly the same? No, but who cares, just as long as it doesn’t exploit animals and it’s not riddled with maggots.

Eggnog is essentially pumpkin spiced mucus. It perfectly recreates the experience of waking up with a cold, in that it coats your insides with thick, warm, gelatinous liquid and makes you want to go right back to sleep. One of the main advantages of living in Britain is the absence of eggnog, and if Trump succeeds in buying his way into the NHS, you’d better believe his next move will be to infiltrate the place with the awful, awful Christmas goo.

Sure, there are now many commercially available vegan eggnog alternatives, but some things deserve to be left in the past. Make the smart choice this Christmas.

What to drink instead: Anything Else

Is there anything we missed? What are the Christmas foods you’ve missed the least since going vegan? Let us know in the comments below!