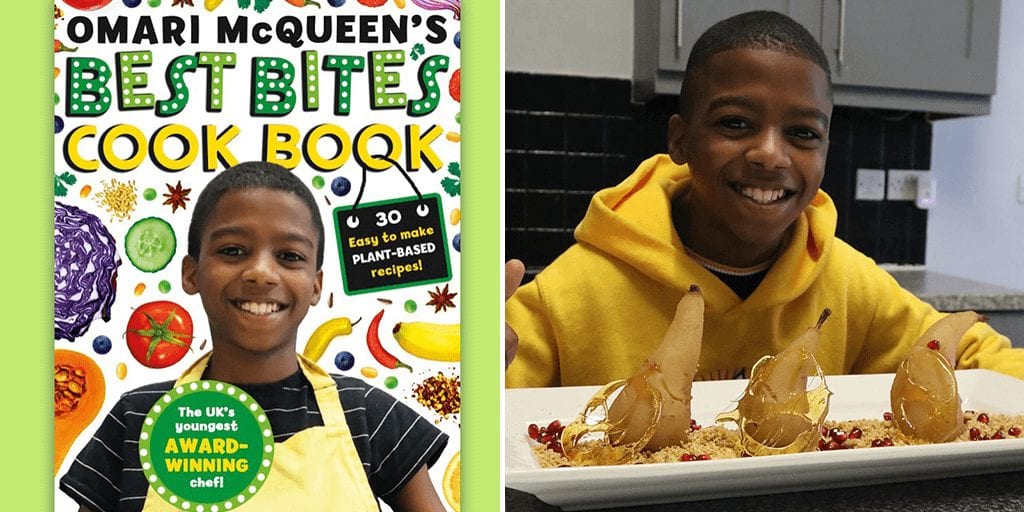 ‘(He) is leading a new generation of ethically minded foodies into a more sustainable future.’

Omari McQueen, the award-winning vegan food entrepreneur is all of 12 years but is already on to his next accomplishment.

From being the founder and CEO of Dipalicious Dips, a vegan dipping sauce business to opening a pop-up restaurant in London, the youngest award-winning chef in the UK is set to release a cookbook titled Omari McQueen’s Best Bites Cookbook featuring 30 delicious vegan recipes in January 2021.

“I am so excited to announce that my first published book will be out in January,” he wrote.

“I would like to thank everyone for all your love, support & encouragement I would also like to say thank you to the one and only @oscarjansonsmith  you have had my back for years, you believed in me from the beginning and @krugercowne @scholastic uk for giving me a chance to share my passion to the world.”

Thanking his family for their support, he added: “Mummy & Daddy your the best a boy like me could have.

“Thank you to my siblings and family for being you perfect.”

“At just 12 years old, he has achieved so much. His passion for food and cooking is irresistible.

“Children everywhere have been busy learning to cook during lockdown; we can’t wait for Omari to share his recipes, tips and enthusiasm with a generation of children and their families.”

“Omari is leading a new generation of ethically minded foodies into a more sustainable future.”

McQueen’s tryst with cooking began when he was barely 7 years old. After his mother’s debilitating migraines rendered her incapable of working, he and his older brother started helping out in the kitchen.

McQueen’s decision to turn vegan however happened after watching a Peta video on animal welfare when he was 8 years old.

“It made me sad how the animals were treated,” he told the Daily Telegraph.

“I decided I couldn’t eat meat after that.”

McQueen has not looked back since going vegan. He has already won 3 awards since launching his YouTube channel called Omari Goes Wild, his Dipalicious business and his pop-up restaurant and festival for children in Box Park, Croydon.

He won the TruLittle Hero Award for being the Entrepreneur Hero under twelve in 2018 by Cause4Children Ltd. He was awarded the Compassionate Kids award for his exceptional entrepreneurial knack to help animals and the Proud and Gifted Award for not only being an amazingly gifted vegan chef but also an inspiration to fellow youths.