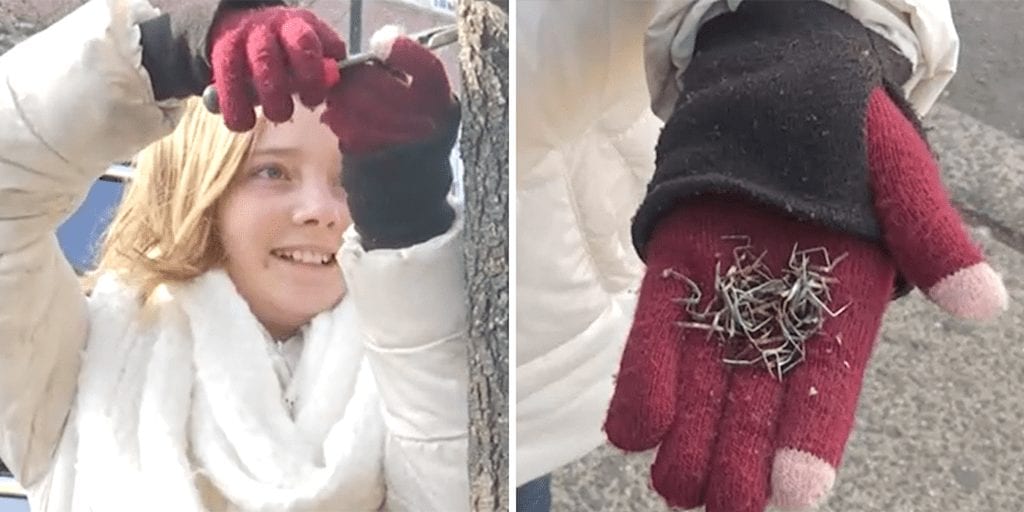 Eilean Faltin, a young volunteer spends her time removing staples stuck in trees in order to preserve the eco- habitat.

The young environmentalist can’t bear seeing the environment being polluted and has always found ways to care for her community.

Starting as young as 8, she joined the Jackson Heights Beautification Group, a local civic organization with her parents and has been actively involved in keeping her environment clean and healthy.

Despite the frosty season, she heads out on a particular Saturday morning to remove staples punched in trees for “no parking” signs on 37th Avenue in Jackson Heights.

“It’s just really, really terrible,” she said. “The trees do so much for us, they’re like our greatest allies in the climate crisis, and they give us oxygen, and they make this neighborhood so much more of a beautiful place. And in return, we like throw garbage in them.”

Although, Eilean admits that the staples don’t kill the trees immediately, they do harm them because the pins “pierce the xylem of the bark,” hampering the “nutrients from getting through the capillaries of trees” making them vulnerable to infections, and stopping them from growing and “spreading oxygen.”

“It’s even worse than I thought it was,” grimaced Eilean.

“It just needs to stop, you know?”It’s so unnecessary. With everything else that we are doing to the planet, it’s just such an unnecessary thing to add on, that we are also killing trees. And we need to just let them help us.”

Eilean is a dedicated volunteer and has removed thousands of staples from trees with other members of the group.

Len Maniace, a Jackson Heights Beautification Group board member said: “It’s great to see someone like Eilean and other young people doing this, because obviously this is a long-term battle that we are involved in here.

It’s going to be not just our generation, but also her generation and the generation after that are going to have to be really dedicated and working to keep the planet livable.”

What do you think of Eilean Faltin’s activism? Share your thoughts in the comments below!