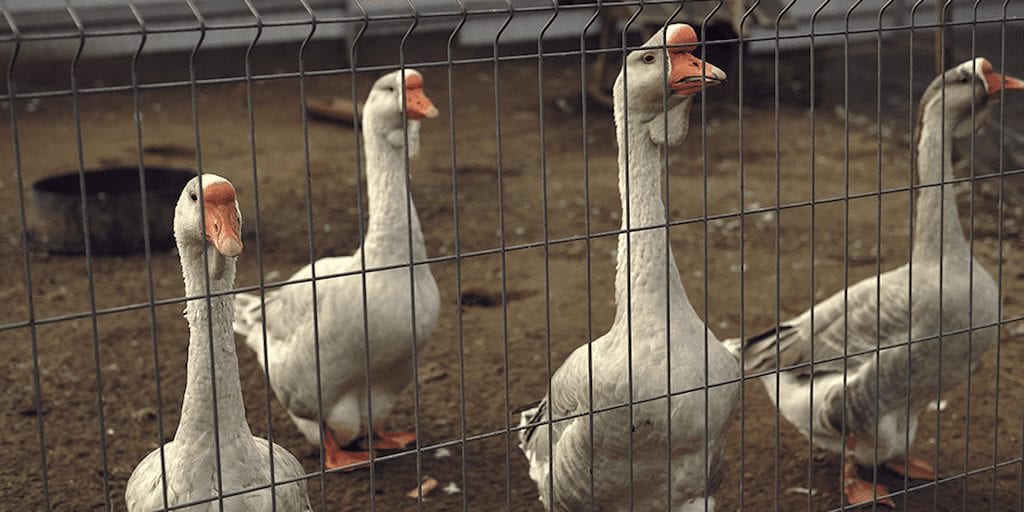 PETA’s petition urging the UK government to ban the sale and importation of foie gras has gained more than 17150 signatures.

While the production of foie gras is illegal in the UK, around 180 to 200 tonnes of this ‘vile food’ is still being imported into the country.

Foie gras, translated as ‘fatty liver’, is produced by force-feeding ducks and geese several times a day until their livers become diseased and swell to around 10 times their natural size.

PETA’s exposés have revealed how ‘long metal feeding pipes leave some birds so badly injured that they have holes in their necks, broken beaks, and oesophagitis’.

The charity’s investigations also show birds struggling to walk, developing bone deformities, and gasping for breath because their enlarged livers compress their lungs.

PETA has therefore launched a petition urging the UK government to ban imports and sales of this “torture in a tin”. The petition has already gained over 17150 signatures.

The vegan charity has also written to George Eustice, the Secretary of State for Environment, Food and Rural Affairs, to take action and ‘close borders to this cruel trade.’

“Foie gras is a notoriously vile food for which birds are condemned to such intense suffering that its production is illegal in the UK and more than a dozen other countries,” PETA’s letter reads

“EU’s own Scientific Committee on Animal Health and Animal Welfare [also] recommends that ‘force-feeding of ducks and geese should stop and this could be best achieved by the prohibition of the production, importation, distribution, and sale of foie gras’.

“We should close our borders to this cruel trade. A ban would reflect the view of the overwhelming majority of Brits – 79% – who want to see an end to imports of foie gras.

“By making the decision to stop importing and selling this vile product, the UK would close the loophole that currently allows a food whose production is so cruel that it cannot take place here to remain on our shelves – and become a world leader in animal protection.”

The luxury department’s spokesperson told The Telegraph that the brand has stopped importing foie gras and will sell off its remaining stock following a ‘decision made last year as part of an ongoing focus on the way we do business.’

“Although it took far too long, we’re thrilled the penny has finally dropped and Fortnum & Mason is joining the list of iconic British institutions that reject this torture in a tin,” PETA’s vice-president, Mimi Bekhechi, said.

The Telegraph also reported that the UK government is now considering a ban on the product.

“The government has made clear that the production of foie gras from ducks or geese using force-feeding raises serious welfare concerns, and the practice is rightly banned in the UK,” a representative of the government said.

“The government is considering the further steps it could take in relation to foie gras.”