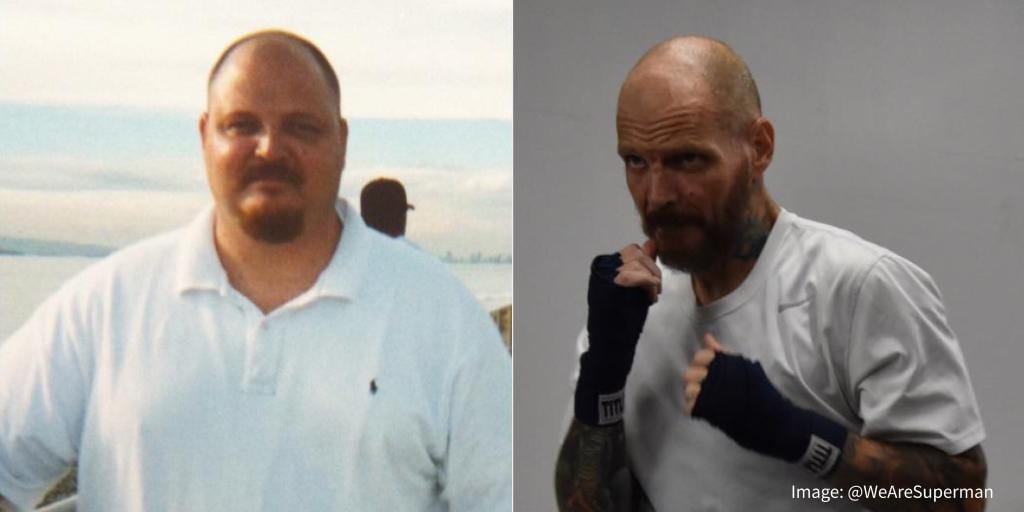 Despite having built an $8 million business in his 20s, by the age of 34 David Clark weighed in at 320 lbs, was addicted to fast food, alcohol and narcotics and admits he was on ‘death’s door’.

“In all my hard work I never learned how to be happy. I never learned the difference between creating profit and being present in life. Instead of enjoying the fruits of my success, I became lost,” Clark explains.

Clark’s unhealthy lifestyle had caused a heart condition, high blood pressure, high cholesterol, two herniated discs in his back and he admits to being ‘a hair away from full on diabetes’.

“One day I drew a line in the sand- I decided I was no longer going to accept death,” he explains.

“Instead I changed my life entirely by surrendering and committing to learning a whole new way to live.”

Clark switched to a vegan diet and reversed his unhealthy lifestyle – and the results are incredible.

Dean Karnazes, endurance athlete and New York Times bestselling author, described the incredible transformation: “David Clark has overcome adversities most of us can’t even begin to fathom. Morbidly obese, hopelessly addicted to drugs and alcohol, he not only turned his life around but went on to complete the world’s toughest footrace, the 135-mile Badwater ultramarathon.”

Clark has published a novel to document his journey named Out There: A Story of Ultra Recovery.

“Inspiring and engaging, Out There: A Story of Ultra Recovery is a dramatic story about dealing with profound difficulties and having the strength and courage to persist, endure and prevail no matter how badly the odds are stacked against you,” Karnazes added.

What do you think of David Clark’s story? Share your thoughts in the comments below!