3,500 buffalos beheaded at festival in Nepal, but activists saved thousands of animals 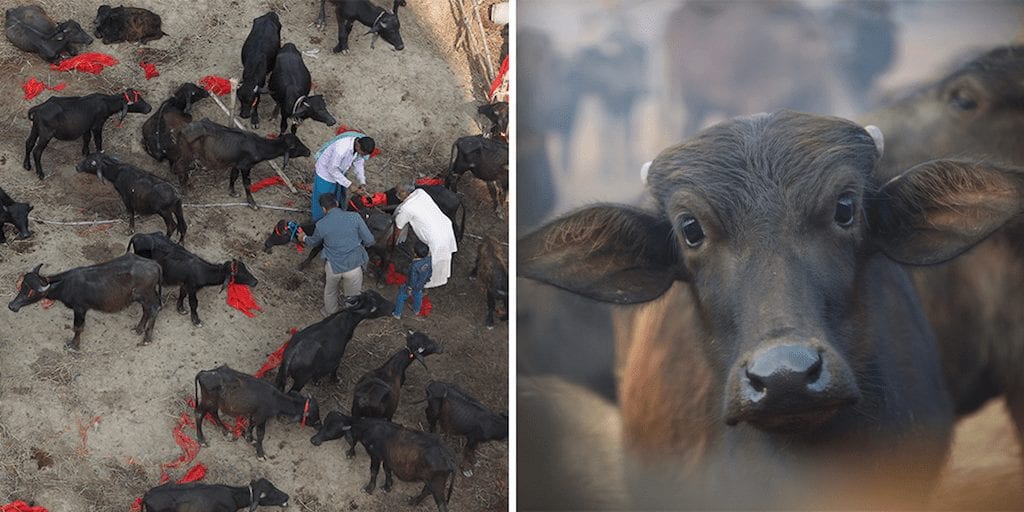 Animal rights campaigners have reported horrific scenes from the Gadhimai festival in Nepal, but the extent of the brutality has been greatly reduced thanks to the tireless work of activists.

“Scenes included baby buffaloes bellowing for their mothers as they watched them being beheaded in the Temple arena, and others collapsing from exhaustion, sickness and stress as devotees tried to drag them to their death,” HSI told Totally Vegan Buzz in a statement.

Though the scenes were harrowing and activists are still battling to further suppress the festival’s killing, the combined efforts of animal welfare groups, faith groups and armed law enforcement at the India-Nepal border have resulted in many thousands fewer animals being slaughtered than at the festival five years ago.

HSI claimed that before the slaughter began, members of HSI India pleaded with the Gadhimai Temple head priest, Mangal Chowdhury, to stop the killing, but he refused to act.

As the sun rose thousands of buffaloes were gathered in the main Temple arena for the mass beheading, most smuggled illegally across the border from India under cover of darkness, according to HSI.

At its height in 2009, the sacrifice event took the lives of around 500,000 buffaloes, goats, pigeons and other animals.

Thanks to the work of animal rights activists and protests at the festival this was reduced to 30,000 in 2014.

And over the past year animal groups such as HSI/India, HSI/Nepal, Federation of Animal Welfare Nepal and People for Animals launched a series of public awareness campaigns to urge devotees not to bring animals, and this has proved a successful strategy.

Alokparna Sengupta, Humane Society International/India’s managing director, said from Gadhimai: “Being here at the Gadhimai sacrifice is one of the most depressing and challenging experiences of my life.

“The suffering of these animals is so upsetting, they have endured exhausting journeys to get here and are paraded in front of a baying crowd as all around them they witness other animals being decapitated one by one.

“Buffalo calves look on in bewilderment as their mothers are slaughtered in front of them. The hysteria and apparent jubilation at seeing confused and frightened animals being slaughtered was very disturbing.

“We pleaded with the Temple priest to do something to stop the bloodshed, as he has the influence to make a difference, but he has chosen to do nothing as far as we are aware, despite the Temple having promised an animal sacrifice ban five years ago.

“Confronted with such terrible scenes of animal slaughter, we take comfort from knowing that many thousands more animals would have died but have been spared this massacre due to the combined efforts of animal groups, multi faith groups and the Indian border force.

“We helped save hundreds of baby goats, pigeons and buffaloes at the border, and devotees have brought thousands fewer buffaloes than at previous Gadhimai events. We may not have a bloodless Gadhimai this time, but we are determined that one day we will see an end to this gruesome spectacle.”

Tanuja Basnet, director of Humane Society International/Nepal, witnessed the slaughter and said: “Such scenes of animal suffering are a stain on Nepal’s international reputation.

“There is no justification for this mass killing, and it is truly heart breaking to witness, especially knowing that the Temple could and should have kept its promise to help these animals.

“It has been left to animal groups like HSI, FAWN, PFA and others to intervene over the past year and urge people not to bring animals for sacrifice. If we had not acted, the lives of many thousands more animals would have been wasted.

“But it is now time for the Nepal government to step up and introduce a ban in law on animal sacrifice so that this is the last time we witness such horrors at Gadhimai.”

What has been done to stop the slaughter?

What is the best method to encourage compassion towards all animals? Share your thoughts in the comments section below!