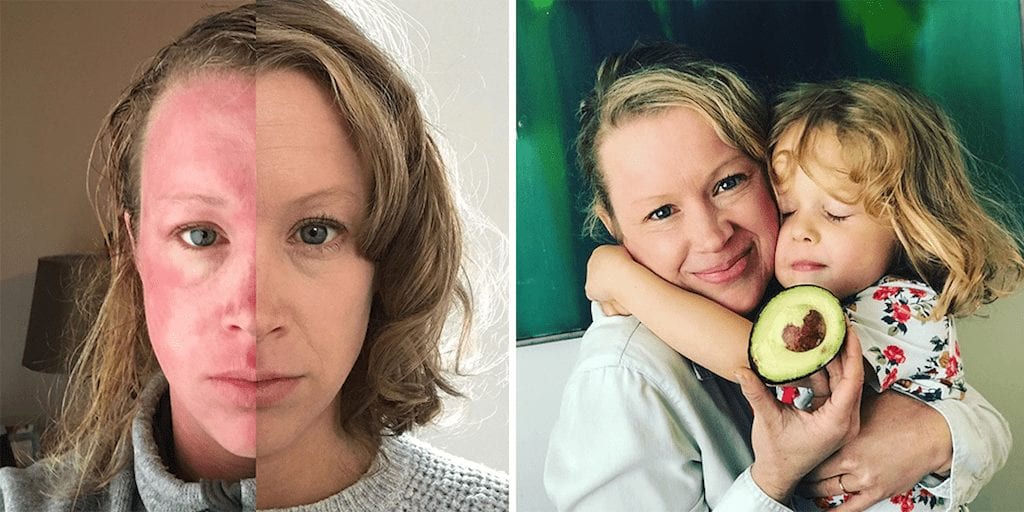 A 36-year-old patient recounts how switching to a vegan diet has helped her heal her skin condition that she controlled using steroid creams for 15 years.

Jennifer Pierce from Los Angeles, US, had her first mild eczema attack, when she was 7 years old.

However, by the age of 25, she started using topical steroids to keep her eczema bouts in control. This led to her skin getting ‘addicted’ to the creams – known as topical steroid addiction and eventually her eczema became uncontrollable and resistant to topical creams.

“I’d used steroid cream since I was 25 years old to help clear my eczema.

“I was never made aware by doctors about the risk of becoming addicted,” Pierce told The Sun.

When she conceived her first child Pixely, her symptoms receded for a while because she was given a high steroid dose only for them to come back stronger after she delivered.

“My skin cleared for the duration of my pregnancy but after giving birth I suffered with horrible flare ups and I was covered head to toe with eczema,” she recalled.

After her skin stopped responding to steroid creams, she ditched the meds only to suffer from topical steroid withdrawal, which caused her severe itching, hair loss, flaky skin, redness, and night sweats.

Pierce, 36, quit her job and was homebound as she was too embarrassed to leave her house.

“I went into hiding because I felt so embarrassed about my appearance – my skin was red, flaky, cracked and bleeding,” she recounted.

After her doctor advised her to try “a complete elimination diet” to rule our food allergies, Pierce started by eliminating dairy, eggs, and gluten in 2016.

In March 2017, she went completely vegan after speaking to fellow eczema sufferers who had managed to reverse their condition with dietary modifications.

She also stopped slathering her skin with moisturizers and washing for four weeks to prevent leaching out the natural oils produced by the body.

“I didn’t even know food could be a culprit. Quitting all moisturisers combined with my diet change was a massive turning point for my skin,” she confirmed.

“I felt uplifted and encouraged to continue eating a plant-based diet because every day my skin was getting better.”

“Now I only have three or four flare ups a year when the season changes and they only last a few days,” she told the publication.

Pierce also swapped her daughter’s diet to plant-based after she got eczema at 18 months and now at age 4, Pixely’s skin is “much better too.”

How has veganism helped you improve your health? Share your stories in the comments below!