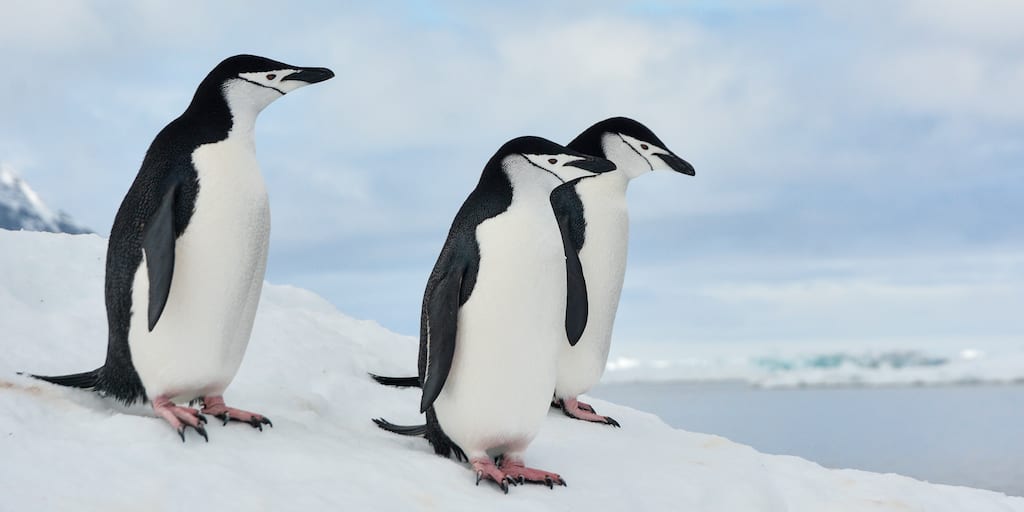 Researchers surveying the Antarctica island have reported that some penguin colonies have declined by more than three quarters due to acute krill shortage brought on by reduced sea ice and warmer oceans.

A team of scientists from the two U.S. universities of Stony Brook and Northeastern joined a Greenpeace expedition to Western Antarctica from Jan. 5 to Feb. 8 to conduct a survey on the thriving colonies of different penguin species.

Using manual and drone surveying techniques, the team discovered that around 77% of the Antarctic chinstrap penguin colonies found on the Elephant Island have disappeared.

They also surveyed chinstrap penguin colonies on Low Island in the South Shetland Islands, north of the Antarctic Peninsula.

The breeding pairs numbers of these adorable penguins also called ringed or bearded penguins due to their characteristic band of black fur under their chins have dropped dramatically since the last survey in 1971.

The receding penguin numbers have been attributed to the shortage of krill, the main staple of the penguin diet. A 2016 study reported that up to 80% of krill, which are tiny shrimp like creatures have declined in some Antarctic seas, possibly as a result of reduced sea ice and higher ocean temperatures.

“The declines that we’ve seen are definitely dramatic,” said Steve Forrest, a conservation biologist who joined the expedition team.

“Something is happening to the fundamental building blocks of the food chain here. We’ve got less food abundance that’s driving these populations down lower and lower over time and the question is, is that going to continue?”

The implications of rising temperatures on the penguin population and other sea life, including krill was corroborated by the country’s meteorological agency, when it published that Antarctica recorded an all-time high temperature of 18.3 Celsius (64.94 Fahrenheit) on February 6. The previous high of 17.5 C (63.5 F) was recorded in March 2015.

Heather J. Lynch, one of the expedition’s research leads, and associate professor of ecology and evolution at New York’s Stony Brook University said: “Such significant declines in penguin numbers suggest that the Southern Ocean’s ecosystem has fundamentally changed in the last 50 years.

“While several factors may have a role to play, all the evidence we have points to climate change as being responsible for the changes we are seeing,” she added.

Greenpeace who led the expedition has been campaigning for the protection of marine wildlife by urging officials at the United Nations to negotiate a Global Ocean Treaty that could preserve at least 30% of the oceans by 2030.

Louisa Casson, Greenpeace Oceans Campaigner, said in a statement: “Penguins are an iconic species, but this new research shows how the climate emergency is decimating their numbers and having far-reaching impacts on wildlife in the most remote corners of Earth. [This] is a critical year for our oceans.

“Governments must respond to the science and agree [on] a strong Global Ocean Treaty at the United Nations this spring that can create a network of ocean sanctuaries to protect marine life and help these creatures adapt to our rapidly changing climate.”

Frida Bengtsson, a Greenpeace Oceans campaigner, told Reuters off Anvers Island: “I think we stand to lose much of what we love… like the penguins from Elephant Island, but I think in the end it’s what kind of world do we want to live in?

“Our oceans are incredibly important to regulate our global climate.”

Share this story to reveal the imminent threat of global warming on the planet.