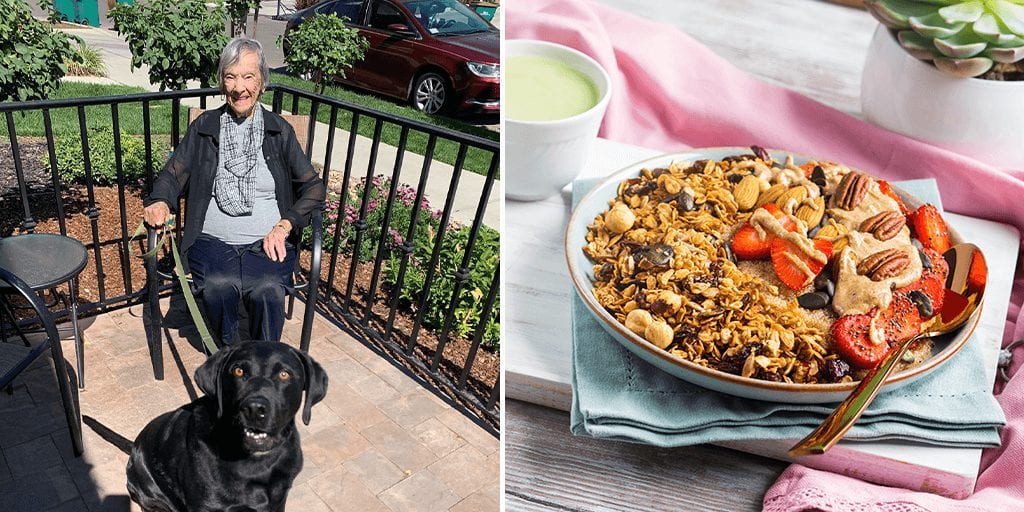 The nonagenarian, who recently completed her first year as a vegan feels the diet has left her feeling “thrilled”, “happy” and “healthy”

An ailing, struggling to walk 96-year-old on heavy medications for multiple diseases, successfully turned her life around after adopting a plant-based way of life, and a year later, a week after celebrating her 97th birthday is living a medication -free life and walking up to three miles a day.

Nonagenarian Josephine Spagnero’s incredible story was discussed on PCRM’s podcast The Exam Room, which is hosted by Chuck Carroll – known as The Weight Loss Champion after losing 280lb on a plant-based diet.

Sharing Spagnero’s background, the show’s host said that a year ago Josephine was a typical senior, on scores of medications, largely sedentary and life for her had slowed down dramatically. She then moved in with her daughter and son-in-law Eric O’Grey, who is an acclaimed vegan. Spagnero at that time switched to a whole-food plant-based diet and within a year was able to achieve an incredible health turnaround, which has allowed her to ditch all her medicines and become mobile again.

Caroll said: “So Josephine, when she moves in, she cuts out all of the meat and all of the dairy. She starts to eat an abundance of fruits and vegetables and what happened next astonished her doctors and will inspire millions.”

On the podcast, Caroll had a conversation with O’Grey, who said: “It is an extraordinary story. She’d been very independent but had become a shut-in and become more and more and more reliant upon various different medications for her health. She had medicines for diabetes and high blood pressure and her medical stats weren’t good at all.”

He added: “So, when she moved in with us, she wasn’t walking that much. She had fairly severe diabetic neuropathy, really poor circulation especially in her legs and feet and it hurt for her to walk.

“So she moved in with us at my wife’s urging…she started immediately eating the healthy, whole-food, plant-based vegan things that we eat. And five weeks after moving in with us last September she went back and got tested. She had a full panel of blood work done…her doctor looked at this and he thought it was extraordinary, he was so happy, he was just blown away.

“Most of her symptoms were normal. She only had a slightly elevated glucose still but he went ahead and took her off all of her medications; diabetes, high blood pressure, everything else.

“She has now been medication-free for about 10-11 months and is super happy. Her entire personality has changed, she’s happy, she’s likes to exercise, she gets out and walks 2-3 miles, she’s a completely different person; happy and healthy.”

Shedding light on  whether Spagnero was receptive to changing her diet at such an advanced age,  O’Grey, who himself has been vegan for 11 years, stressed that it although change is difficult and altering an old habit can be daunting, there is enough medical information that supports the health benefits of a vegan diet and one needs to be open minded like Spagnero to be able to reap the benefits.

Answering Caroll question on what was her reaction on being able to finally ditch the medicines, O’Grey replied: “She was thrilled because she hated the medication. She was delighted to go off all the medications because they made her tired, had certain effects on her. All those things went away based on a whole-food plant-based diet.”

Share this story: 97-year-old who switched to plant-based ditches medicines and starts walking within a year.