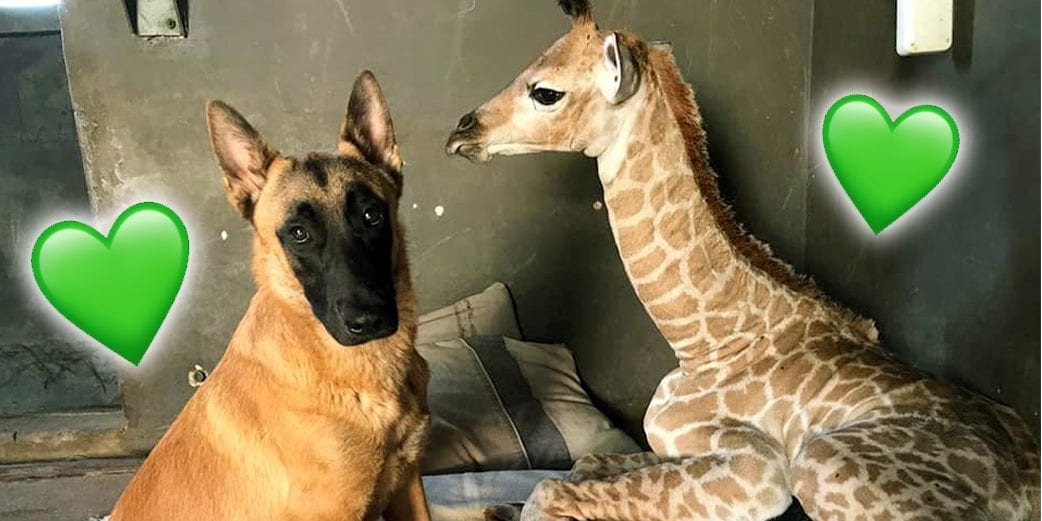 An abandoned baby giraffe has found a close buddy in a dog at the Rhino orphanage in South Africa.

Jazz the baby giraffe was abandoned soon after birth and would’ve died if not for a farmer that rescued him on November 17.

The calf being barely 3 days old was weak and dehydrated and needed urgent attention if it had to survive.

In a post, the orphanage caretaker Janie Van Heerden informed that “the baby was very comatose for the first 18 hours.”

However, as soon as Jazz arrived at the center, Hunter, a Belgian Malinois pup and resident watchdog took keen interest in the newcomer and would not leave his side.

In a Facebook post shared a week ago, The Rhino Orphanage wrote: “He stays in the room all day with Jazz and the carers and doesn’t allow his brother Duke close.

“So concerned was Hunter about Jazz when he was in a coma that he did not want to eat.”

The Rhino Orphanage has been documenting the friendship between Jazz and Hunter posting heartwarming videos of the two chums.

“The bond and understanding between Jazz the giraffe and Hunter our AP Belgian Malinois is astonishing,” wrote the center on a video released on Friday.

Earlier the calf was so weak that he could barely walk or eat.

“Baby giraffes are notorious for being labor-intensive and difficult to get on a bottle …” shared the caretaker on social media and Jazz had to be administered a catheter to provide it with fluids and nutrients.

According to a carer, a week later Jazz is well on the road to recovery and now feeds on milk and leaves as seen in one of a series of adorable Facebook videos.

In another video, Jazz is seen guzzling milk for breakfast and the caption reads: “We love eager milk drinkers in the morning…❤️? our carers will have to bring out the stepladder soon!”

With Jazz’s feeding well and growing stronger by the day, Van Heerden believes that he will soon be ready to go back in the wild.

Share this heartwarming story of friendship to show how friendly and loving animals can be!