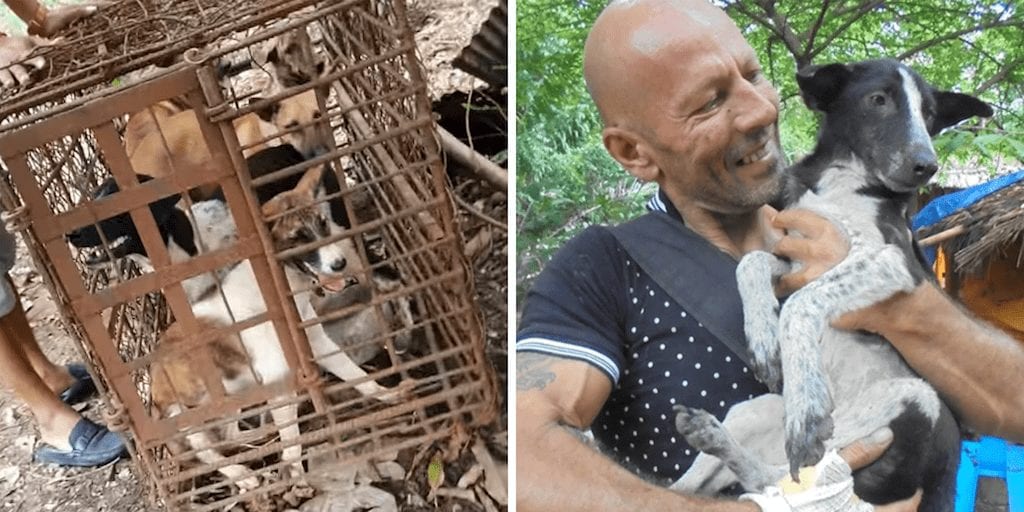 Image: The Sound Of Animals

A French animal rights activist flew to Cambodia to free seven dogs from a slaughterhouse.

Michael Chour, 49, travelled more than 6,000 miles in May in a bid to free as many dogs as possible from a slaughterhouse that killed around 200 dogs daily for the dog meat trade.

He managed to rescue seven dogs from being slaughtered and effectively saved many more after he convinced the slaughterhouse to close.

Recounting the dogs’ ordeals, Chour said: “The animals were denied food and water for days, battered with poles and their cages hurled to the floor, resulting in broken bones.”

Chour, the founder of the Sound of Animals shelter, said: “The family who owned this house had been torturing and killing dogs for generations.

“In Cambodia, there are approximately five million dogs tortured to death every year – this slaughterhouse that closed tortured and killed around 200 dogs a day.

“I kept this establishment under observation for days and nights and saw turned away crates of dogs, destined for slaughter, over and over again.’

Chour wants to spread awareness about the horrors of the dog meat trade and hopes others will raise their voices and contact their government to put a stop to it.

Chour admitted that over the years he has witnessed some of the cruelest killing techniques during his dog-rescue operations.

He said: “The dogs are transported and kept in tiny cages to the point of not being able to move, denied food and water for days, treated barbarically, hit with metal poles if they bark, or cry, cages thrown on the floor, resulting in broken bones and internal injuries.

“They are then tortured to death, which can last from a couple of minutes to five minutes, depending on the methods used.”

He continued: “This slaughterhouse cut all four of the dogs’ joints, prior to being thrown in a pot of boiling water, so they were boiled alive, to death.

“The joints were cut in order to stop the dog escaping the pot of boiling water.”

Chour said the workers deliberately torture the dogs. “The idea they have, is the more a dog suffers the better the meat, they believe the meat has health benefits, and increases libido,” he said.

“This is why people need to do anything they can to stop this happening.

“Luckily, this footage shows a happy ending and I’m so glad that I could save these dogs – but there’s many out there who aren’t as lucky.”

What do you think of the activists’ efforts? Share your thoughts in the comments section below!