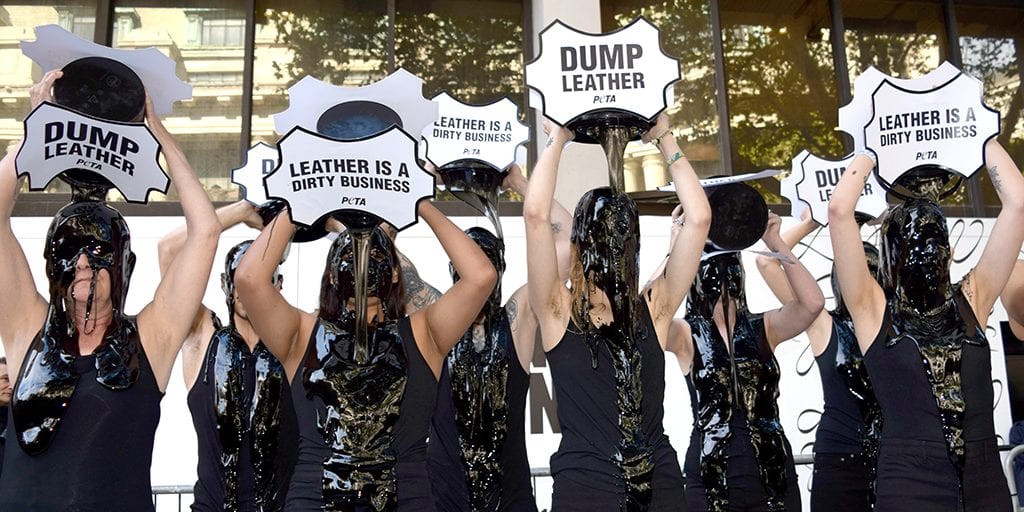 Animal rights activists held a striking demonstration at London Fashion Week in which protesters poured buckets of black “toxic slime” over their heads.

The action by People for the Ethical Treatment of Animals (PETA) aimed to raise awareness of the hazardous waste associated with the leather industry. Signs on buckets of slime read “Leather Is a Dirty Business” and “Dump Leather.”

“No one needs cow skin except the gentle animals who were born in it,” PETA Director Elisa Allen said in a statement sent to Totally Vegan Buzz.

“PETA is calling on London Fashion Week to protect animals and the planet by kicking cruel, toxic leather off the catwalk. Consumers can help, too, by giving animal leather the boot.”

More than a billion animals are killed for leather each year. Animal agriculture – which includes the leather industry – is responsible for nearly a fifth of human-induced greenhouse-gas emissions and is devastating the planet.

More than 90% of the Amazon rainforest that’s been cleared since 1970 is used for grazing or for growing food for cattle – including those used for leather.

The 2017 “Pulse of the Fashion Industry” report found leather to be the most polluting material used for clothing.

A PETA exposé narrated by Leona Lewis shows how tanneries use toxic chemicals to prevent animals’ skin from decaying.

Unprotected workers, including children, stand barefoot as they soak hides in carcinogenic chemicals. The noxious waste is then dumped into the river.

PETA – whose motto reads, in part, that “animals are not ours to wear” – notes that Helsinki Fashion Week has banned leather, encouraging designers to focus instead on superior vegan leathers, which include those made from microfibres, Ultrasuede, recycled polyurethane, pineapple leaves (Piñatex), mushrooms, and wine grapes (Vegea).

What do you think of PETA’s protest? Share your thoughts in the comments section below!