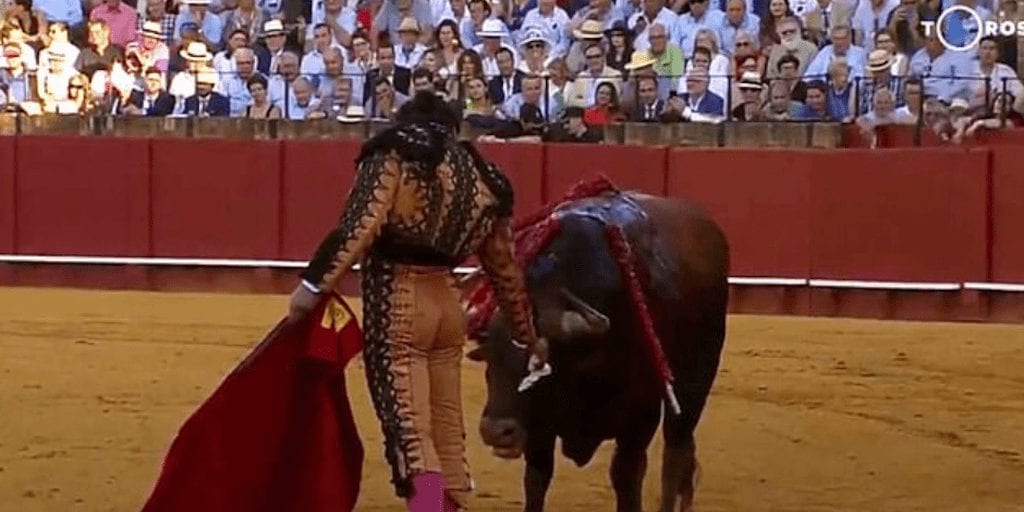 Animal rights activists have been left disgusted after a matador wiped bloody tears from an injured bull’s eyes before killing the animal.

The act by bull fighter Morante de la Puebla shared widely by activists, who described his actions as ‘malicious and perverse’.

He was performing at a festival at the Real Maestranza bullring in Seville southern Spain.

While the bull is close to death from its injuries, he is filmed approaching the helpless animal, pulling a handkerchief from his pocket and wiping blood from its eyes before killing it.

Four spiked ‘banderillas’ are seen pointing out of the bull’s back, before it is finally killed.

Silvia Barquero Nogales, leader of Spain’s Animalist Party Against Mistreatment of Animals (Pacma) political party, said: “Only a malicious and perverse mind could torture an animal until the blood pours down its legs and then wipe its face with a tissue.

“The matador is just disguising for his lack of empathy. Abolish bullfighting now!”

The video has been widely shared on Twitter, and highly criticised. Some described it as a ‘psychopathic geasture’ while the video refreshed calls for bullfighting to be outlawed.

But others have defended the bullfighter’s actions, claiming he was showing ‘respect’ for the animal.

What do you think of bullfighting? Share your thoughts in the comments below!