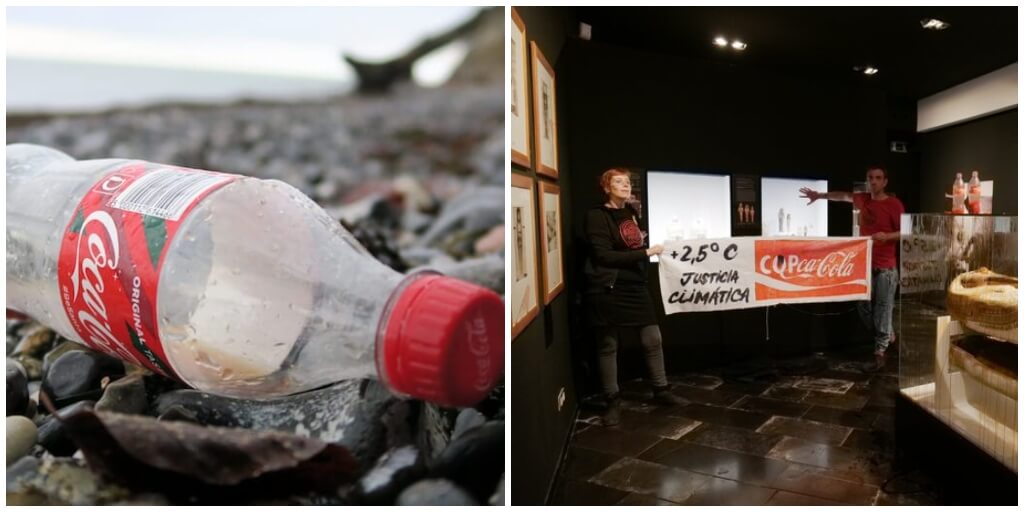 Coca-Cola – known to be the world’s largest plastics polluter – is one of the official sponsors of the UN’s COP27 climate summit.

Eco activists threw fake blood and oil on artefacts displayed at the Egyptian Museum of Barcelona.

Two activists from Futuro Vegetal – a Spanish organisation – doused the display case with red and brown gunk from Coca-Cola bottles to protest the soda company’s sponsorship of COP27 in Sharm el-Sheikh, Egypt.

They also splatter framed images on surrounding walls, glued themselves to the paintings, and held a banner that read COPca-Cola in the brand’s signature font.

Coca-Cola – known to be the world’s largest plastics polluter – is one of the official sponsors of the UN’s COP27 climate summit.

According to Break Free From Plastic’s (BFFP) 2021 annual audits, there were 330,493 pieces of plastic waste collected  from various public sites all over the world. 58% of these items were clearly marked with a consumer brand, and for the fourth year in a row, Coca-Cola came out as the “world’s top polluter” among all brands.

“We will no longer stand that governments wash their reputations at climate summits, deceiving their constituents without taking real measures,” Futuro Vegetal tweeted.

“While the UN foresees a rise of 2.5 degrees Celsius, our political leaders sit together for the 27th time, at a table paid for by Coca-Cola, an ecocidal corporation.”

‘Negates the very objective of the climate COP’

Many climate activists have blamed COP27 of greenwashing for taking Coca-Cola on as a sponsor.

John Hocevar is Greenpeace USA’s oceans campaign manager. He told PackagingInsights: “This partnership with Coca-Cola negates the very objective of the climate COP.

“This climate meeting is called the African COP, yet corporations like Coca-Cola, working hand in hand with the fossil fuel industry, are flooding Africa with plastic.”

Futuro Vegetal in a statement added: “Currently 99% of the world’s plastic is produced from fossil fuels.

“We find it hard to believe the global leader in plastic pollution is not going to use its influence as a sponsor of COP27 to advance its commercial interests given its total dependence on fossil fuels.”

How is plastic pollution aggravating the climate crisis

The plastic industry produces more than 380 million tons of material each year. This eventually ends up as pollutants, entering our natural environment and oceans.

Moreover, almost all plastic comes from materials (like ethylene and propylene) made from fossil fuels (mostly oil and gas). The process of extracting and transporting those fuels, then manufacturing plastic creates billions of tonnes of greenhouse gases thereby accelerating climate change.

According to researchers of the field, production and incineration of plastic released more than 850 million tonnes of greenhouse gases into the atmosphere in 2021. By 2050, those emissions could rise to 2.8 billion tonnes.

Also, the breakdown process of plastic releases greenhouse gases.  When not recycled or disposed of responsibly, discarded plastic waste generates methane and ethylene (GHG emissions) when exposed to sun rays both in air and water.

In water, plastic pollution also affects the sequestering capacity of plankton. The diverse collection of organisms found in water captures 30-50% carbon dioxide emissions through photosynthesis. However, after grazing on microplastics, plankton’s ability to remove carbon dioxide from the atmosphere decreases.

Furthermore, at least 8 million tonnes of discarded plastic ends up in our oceans each year. This excessive waste threatens sea life and destroys habitats. Plastic pollution kills more than 100,000 marine mammals every year through choking, smothering, and toxic contamination.