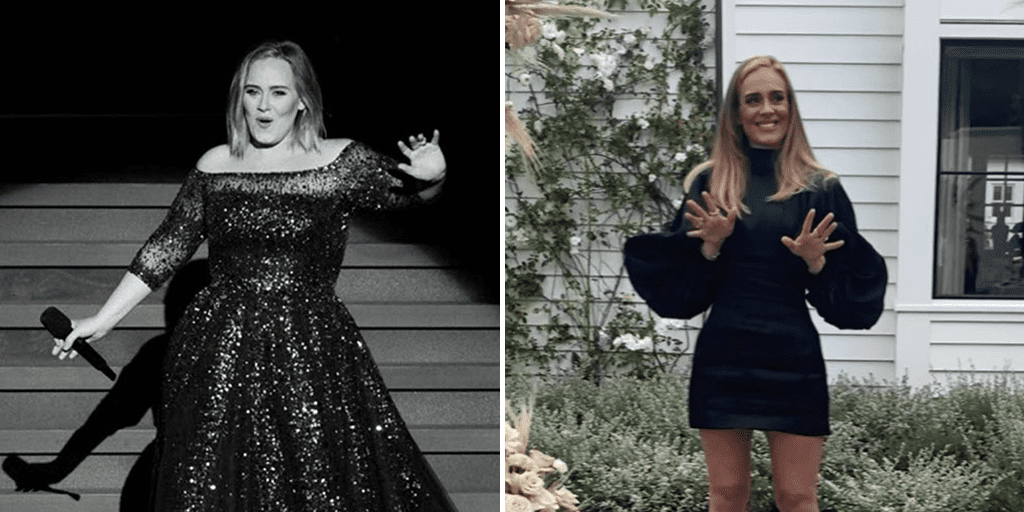 Reports indicate that eating specific plant-foods and exercising has helped Adele lose 100 lbs, which has completely overhauled her looks.

While Adele’s first 2020 Instagram post on May 5 was to appreciate first responders and essential workers on the frontlines of the coronavirus crisis as well as thank her fans, who wished her on her birthday, social media couldn’t peel their eyes off the picture she posted alongside the message.

Through a full-length picture, Adele showed off the dramatic weight loss transformation she has had in recent years. Posing in a black mini dress, complete with puffball sleeves, the singer looked radiant and gorgeous on her 32nd birthday.

“Thank you for the birthday love. I hope you’re all staying safe and sane during this crazy time,” she captioned the post.

“I’d like to thank all of our first responders and essential workers who are keeping us safe while risking their lives! You are truly our angels ♥️2020 okay bye thanks x.”

Although the British singer has not commented on her weight loss or dietary choices, tabloids and insider reports claim Adele has lost around seven stone in total through exercise and diet.

Last October, she shared a stunning snap on Instagram of herself at Drake’s birthday party, with a caption that read: “I used to cry but now I sweat”

Back in 2016, she told Vogue that she had started exercising to improve on her stamina and energy.

She said: “I was trying to get some stamina for my tour, so I lost a bit of weight. Now I fit into normal, off-the-shelf clothes – which is a really big problem for me!”

Later, in January this year, it was reported that the multi-talented singer with multiple Grammys and an Oscar to her name followed the SIRT Food diet developed by UK based nutritionists Adian Goggins and Glen Matten.

The selected foods help activate sirtuins (SIRTS) — a group of seven proteins found in the body that are said to control and regulate various body processes such as metabolism, inflammation, and ageing.

While many lauded the singer for her amazing weight loss journey, others condemned the unwarranted attention to her physical appearance.

In one tweet, Audra Williams, a Toronto-based writer tweeted that weight loss could indicate serious physical or mental-health issues and complimenting celebrity weight loss could have serious implications on others struggling to lose weight.

Celebrating Adele's weight loss is a garbage thing to do for a million reasons. Here are two:

1. It tells your fat friends you think their bodies are a problem to be solved.

2. The weight loss could be the result of physical or mental health struggles. Weird to cheer about!

However, Adele’s former trainer, Pete Geracimo defended the star’s transformation, saying it was “never about getting super skinny. It was about getting her healthy.”

He mentioned that both he and Adele underwent a 13 month “gruelling schedule” post the singer’s pregnancy and surgery in which she “embraced better eating habits and committed to her fitness” resulting in considerable weight loss.

He added: “This metamorphosis is not for album sales, publicity or to be a role model. She is doing it for herself and for Angelo.

“My hope is that people appreciate the hard work that Adele has done to improve herself for the benefit to her and her family only.

“She did not lose the weight to make others feel bad about themselves.

“This personal transformation has nothing to do with me or you.

“It’s about Adele and how she wants to live her life. She has not changed from the Adele we grew up with and have loved. There is just a little less of her to go around.”

Several studies have extolled the benefits of eating plant-based foods for a healthier mind and body.

Research has shown that eating plant-based can  reduce cardiovascular risks up to 32% and decrease the risk of other lifestyle-related diseases  by 25%.

Another study conducted by The Physicians Committee for Responsible Medicine showed that a plant-based diet promoted healthy intestinal flora which could lead to fat loss without restricting calories.

Participants of the study eating a vegan diet lost almost an extra pound a week as compared to those on a non-vegan diet.

The weight loss in the vegan study group was largely because of a drop in fat mass normally stored in the abdominal cavity.

Share this news to promote the benefits of eating plant-based foods.