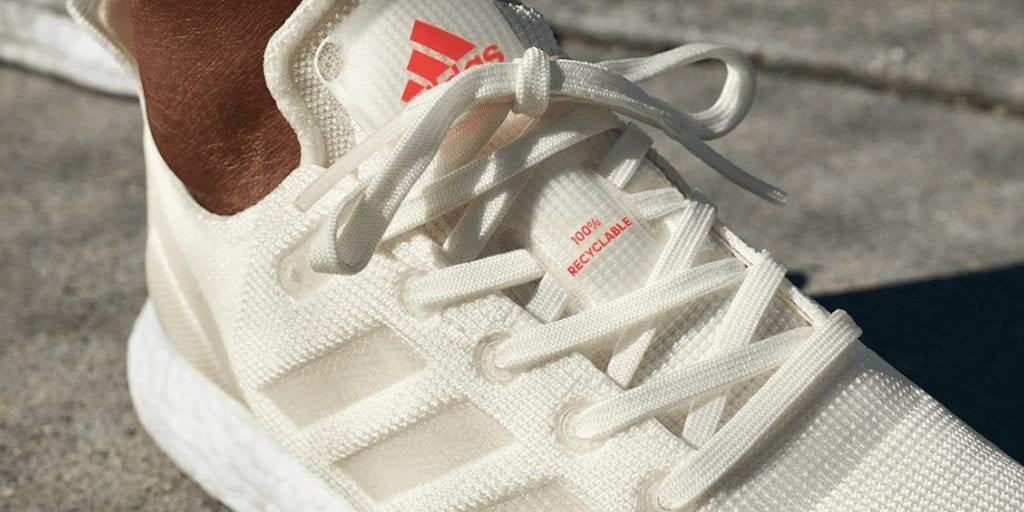 The FUTURECRAFT.LOOP running shoes are 100% vegan and recyclable. Image: Adidas

Adidas has been on a mission to become more environmentally friendly for many years. In 2015 it created the first sports shoe made from recycled and reclaimed plastic from the ocean, together with Parley for the Oceans.

The new technology has been applied to the the FUTURECRAFT.LOOP performance running shoe.

Sports footwear typically includes complex material mixes and component gluing – resulting in a shoe which can only be downcycled.

But Adidas’ new shoes just use one material, require no glue and can be spun to yarn, knitted, moulded and clean-fused.

Eric Liedtke, Executive Board Member at Adidas, said: “Taking plastic waste out of the system is the first step, but we can’t stop there.

“What happens to your shoes after you’ve worn them out? You throw them away – except there is no away. There are only landfills and incinerators and ultimately an atmosphere choked with excess carbon, or oceans filled with plastic waste.

“The next step is to end the concept of ‘waste’ entirely. Our dream is that you can keep wearing the same shoes over and over again.”

The name ‘FUTURECRAFT.LOOP’ refers to attempts to create a ‘closed loop’ – where raw materials can be repurposed an infinite amounts of times back into running shoes rather than into plastic bottles.

Once the shoes come to the end of their first life, they should be returned to Adidas.

They’re then washed, ground to pellets and melted into material for components for a new pair of shoes, with zero waste and nothing thrown away.

“FUTURECRAFT.LOOP is our first running shoe that is made to be remade. It is a statement of our intent to take responsibility for the entire life of our product; proof that we can build high-performance running shoes that you don’t have to throw away,” Liedtke added

The company has also committed to only using recycled polyester in every product where a solution exists by 2024.

Tanyaradzwa Sahanga, Manager, Technology Innovation at Adidas, added: “We set out to create a new type of product that we can take back, grind up and reapply into new adidas product.

“We knew this was a far-reaching vision in every way; technically and even behaviourally.

“There were times when it didn’t seem like we could get over some of the technical hurdles – now we’ve made the first leap, the playing field has changed.

“We cannot create a circular future on our own, we are going to need each other. We’re excited to see this first step come to life as part of the beta launch.”

What do you think of Adidas’ new technology? Tell us in the comments section below!