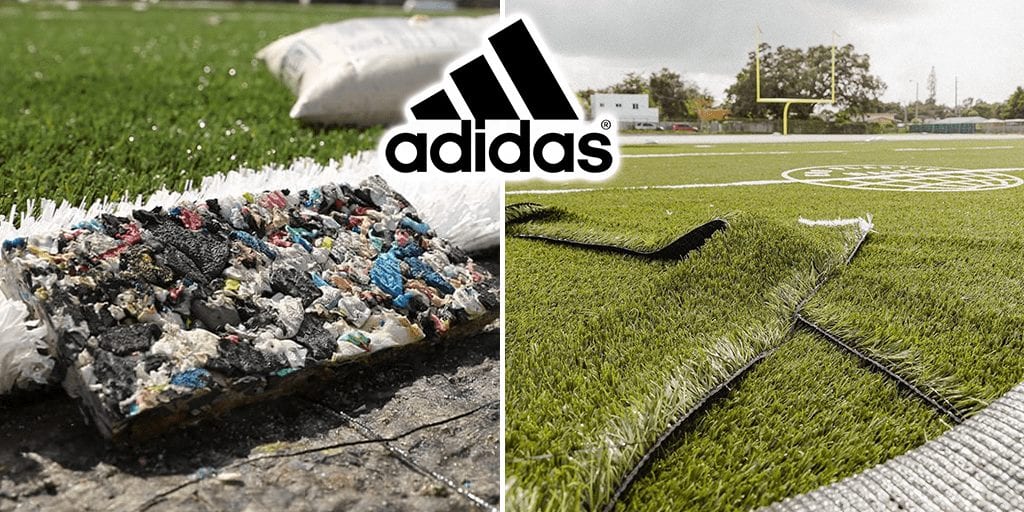 After pledging to end the use of all virgin polyester in its footwear by 2024, Adidas has constructed the brand’s first sustainable football field made out of approximately 1.8 million plastic bottles or 40,000 pounds of plastic waste with long-term partner Parley for the oceans.

All the plastic bottles have been sourced from remote islands, beaches, coastal communities and shorelines in an attempt to reduce plastic waste.

The field called “1.8” has been constructed at Miami’s Edison High as part of the company’s contribution in helping upgrade facilities for the high school and the wider Liberty City community that has produced a number of current and former NFL stars.

Building for a better tomorrow. ?

Approximately 1.8 million plastic bottles were repurposed and used to build this new home for @miamiedisonsr. pic.twitter.com/r3kNGk4Mqj

“We believe that through sport we have the power to change lives, and this field is a demonstration of our taking action on that belief. More than a place for these young athletes to play, it’s a reminder of our collective responsibility to end plastic waste,” said Cameron Collins, Adidas North America’s director of football.

Much love to @adidas ?? they’re changing the game here in Miami with this new sustainable field. It’s all about making this game greater and the world even better. Stay ready Edison this turf is gonna be ?

After teaming up in 2016, Adidas and Parley, a nonprofit that works to protect the oceans have produced millions of pairs of eco-friendly shoes created entirely from plastics recovered from the ocean.

Apart from the football field, the apparel company and Parley have also launched a limited-edition capsule collection featuring football cleats, running footwear, and training apparel made with ocean plastic.

In addition, Adidas and Parley are joining hands with the University of Miami to open North America’s first Academy for the Oceans to increase awareness about “environmental stewardship and sustainability with the community”.

What do you think of Adidas’s sustainability efforts? Share your thoughts in the comments below!