Adorable Piglet- a pink, deaf and blind puppy is helping children overcome their own challenges and struggles – Totally Vegan Buzz
Skip to content

Adorable Piglet- a pink, deaf and blind puppy is helping children overcome their own challenges and struggles 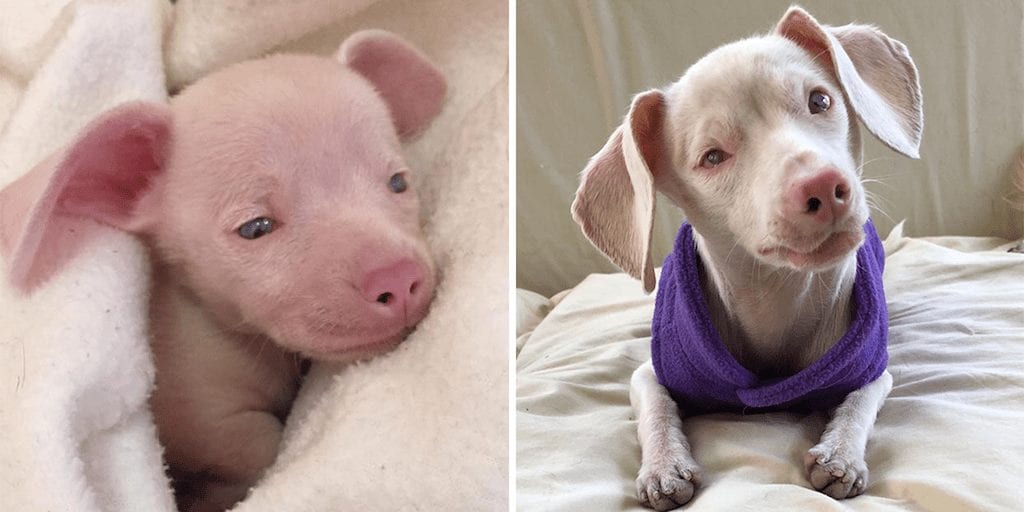 Piglet, a deaf blind pink puppy has become a mascot of bravery, acceptance and positivity for children around the world.

Piglet, a mix between a Chihuahua and Dachshund was born in an overcrowded Georgia home. He was ironically named Piglet because of his pink pastel skin hue.

He, unlike other puppies, was deaf and blind at birth as a result of congenital abnormalities that affect 25 % of the puppies born when two dapple color patterned dogs are bred.

However, Piglet got a new lease of life when Melissa Shapiro, a veterinarian rescued him from a hoarding situation and took him to Connecticut.

Because of Piglet’s handicap, Shapiro only intended to foster him temporarily till he found a new home. But she soon changed her mind and ended up officially adopting the pup as her seventh dog.

Speaking to People, Shapiro explained: “It was quite a decision to make. He is a lot of work and he is like a full-time job, taking care of a little disabled baby. But he’s so cute, and we couldn’t give him away at that point.”

But Piglet was high-strung and had several teething issues. “He was so anxious; he was screaming constantly. He would play, then go to sleep, but when he wasn’t doing either of those, he was screaming. I couldn’t leave the house the first month I had the dog here,” she added.

However, with Shapiro’s love, and attention, Piglet finally settled into a routine.

Shapiro kept sharing his journey on Instagram chronicling his milestones to inspire his growing fan following and paving the way for her Piglet Mindset Outreach Program.

Shapiro told  People that a third-grade school teacher in Massachusetts was so inspired by Piglet’s journey that she used him as an example to teach her young pupils the importance of acceptance, positivity, perseverance and resilience.

“She called it Piglet Mindset, and we corresponded throughout the year. At the end of the year, we surprised the kids. They thought we were going to FaceTime, and we walked in with Piggy in his stroller and three of my other dogs, and everyone was crying,” said Shapiro.

The Piglet Mindset effect has been so profound that children have been inspired to practice a “Piglet state of mind,” when faced with challenges and when problems arise, ask “what would Piglet do?”

To further foster the teachings, Shapiro created the official Piglet Mindset Outreach Program to include online learning materials for children to remain positive, face challenges bravely, be flexible, spread love and never give up among other useful tools.

The program freely available to download on her website has been adopted in classrooms across the world including Alabama, Connecticut, Japan and Australia.

Shapiro also raises funds through social media and customized merchandise to sponsor special needs dog rescues and other non-profit organizations and has collected over $30,000 so far.

She hopes to continue raising awareness for special needs animals and start up a non-profit herself in the future.

“People are afraid to adopt these animals; they think that it’s going to be too much work. But people see Piglet’s page and I get so many notes from people that because of him, they just adopted.

“It’s rewarding to know that people are taking the lead and being inspired by Piggy. It makes a lot of people really happy to know him,” she states.

Share Piglet’s journey to inspire others facing challenges and hardships!