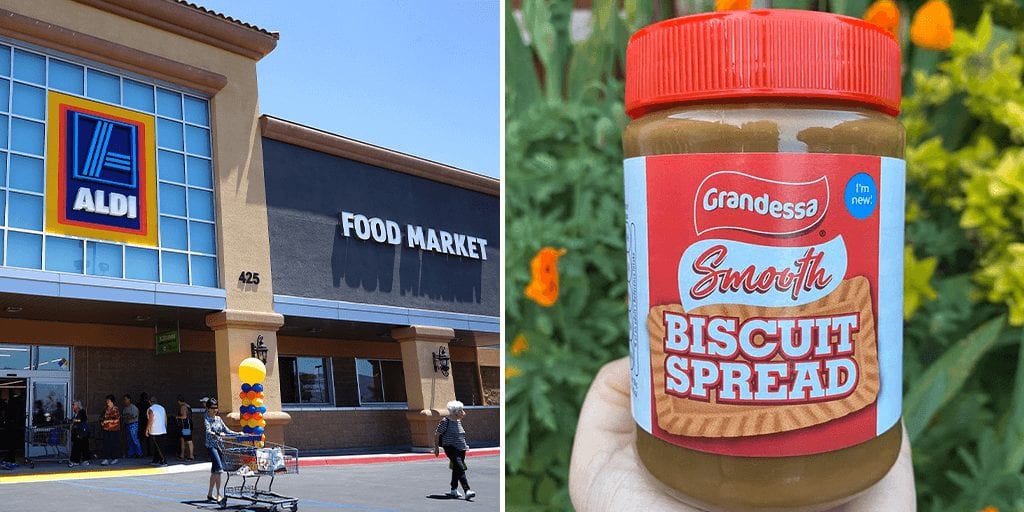 Budget supermarket chain Aldi has launched a vegan biscuit spread that is cheaper yet just as tasty as the Lotus Biscoff spread.

The spread is soya free and is said to rival the more popular Lotus Biscoff spread.

It added that people who have tasted the new product ” couldn’t tell the difference between this and Biscoff spread.”

Soya Free Biscuit Spread Just Launched at Aldi – cheaper than Biscoff, tastes the same! ? _____ TAG af friend who needs to know about this ? First reviews back of this are that you couldn't tell the difference between this and #biscoff spread ? We hear it's £1.79 but just looking for confirmation SWIPE LEFT FOR INGREDIENTS The ingredients on the back are #soyafree but the allegen warning is "may contain egg and soya" Also comes in smooth, which is our favourite ? Great find @_pennygeorge ? _____ Follow us @vegan_food_uk to support us ? . . . . . #veganfooduk #veganfood #veganuk #ukvegans #whatveganseat #vegano #vegannews #veganism #aldivegan #veganaf #veganpower #veganlife #vegantreats #veganchocolate #veganuary2020 #veganfoodlover #foodie #vegankids #wow #new #vegancommunity #veganfoodshare #veganstagram #foodie #veganbiscuits @aldiuk

While Aldi’s vegan biscuit spread will reportedly cost £1.79 a jar is a great deal as compared to the Lotus Biscoff spread, which typically costs around £2.28 for a 400g jar in supermarkets such as Tesco and Asda.

Although the product has been advertised as soyafree, the jar carries the allergen warning, which states it “may contain egg and soya”

Despite the ongoing coronavirus pandemic, several companies are launching new vegan products to cater to the growing demand for meat and dairy alternatives.

Of the 3 flavours launched, which include Vanilla, Milk Chocolate, and Biscoff Cream—the latter is prepared using vegetarian and vegan ingredients.

The sandwich cookies have been launched in Belgium, France, and in the United Kingdom, where they are currently available in Tesco stores, retailing at £1.39 for a pack of 15 and online.

“The new Sandwich biscuit is the ultimate taste sensation that is sure to go down in biscuit history,” Biscoff said in a statement.

The new bar is dairy-free, gluten-free, egg-free and nut-free making it perfect for vegans and nut allergy sufferers alike.

Share this news to let others know of the new vegan biscuit spread from Aldi.