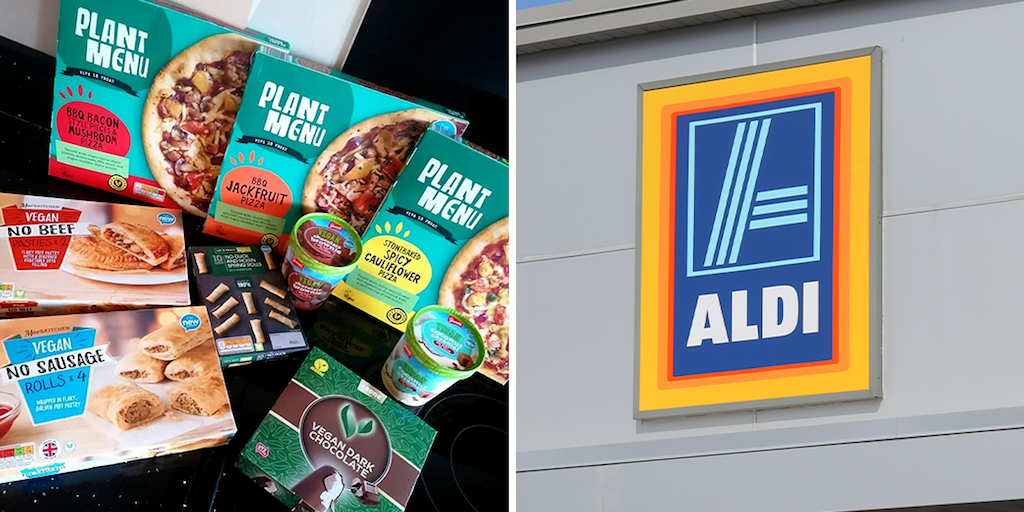 Aldi has expanded its range of plant-based meals for Veganuary to include snacks, dinner items and ready meals.

With more than 100,000 people already on board to go vegan for Veganuary, the interest in plant-based foods is higher than ever before and most food retailers are eager to help their customers by providing more cruelty free choices.

Aldi is set to unveil 10 new vegan items from sandwiches and main meals to desserts on 2 January 2020.

Following Greggs cue, the supermarket has added vegan sausages to its menu. Touted to “resemble the real deal in both shape, size and taste,” Aldi’s Plant Menu Vegan Rosemary & Onion Sausages for 99p are already on the chain’s shelves from December 30.

The other flavours to be released in the Plant Menu Vegan Sausage Roll range include BBQ Jackfruit and No Pork and will be sold for 99p each.

Next up, the supermarket chain has a Plant Menu Vegan Pizza for £1.75 in 3 flavours: BBQ Jackfruit, Spicy Cauliflower or ‘Bacon’ and Mushroom.

The pizzas will be launched on New Year’s Eve.

Aldi has you covered if you’re looking for side orders. Its Specially Selected Vegan Parcels filled with herbs and spices as well as BBQ Jackfruit or Spicy Firecracker Vegetable will cost £2.99 for two and will be on the shelves from January 2.

You can replace the classic tuna and cucumber sandwich for the Loma Lind Fishless TUNO for £1.19 per can. It’s made from textured soy protein, which tastes of seaweed powder and vegan fish flavouring, and is available in mayonnaise or spring water.

The other dishes worth a try include the Inspired Cuisine Vegan Ready Meals, such as Mushroom Bolognese and Three Bean Chilli, both £2.49 and the frozen collection, which includes Smoky BBQ Jackfruit, Red Pepper & Mango Curry and Yellow Thai Curry for £1.99 each.

To indulge your sweet tooth, Aldi will release the Leone Vegan Choc Stick that contains three sticks and costs £1.49.

Which supermarket offers the best vegan range? Share your thoughts in the comments below!