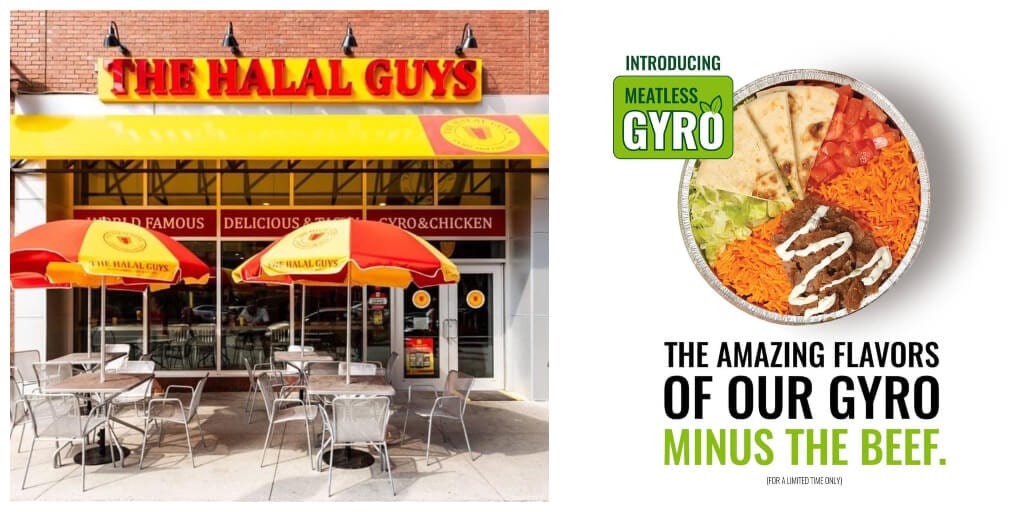 Restaurant chain The Halal Guys is responding to the growing demand for vegan options with its new vegan gyro meat and dairy-free tzatziki sauce.

NYC’s The Halal Guys has rolled out a limited-edition vegan offering The Meatless Gyro at participating locations across the US to meet the growing demand for meatless options.

The newest dish is a healthy, gluten-free alternative to the beef gyro – a staple on The Halal Guys menu for decades.

The soy-free option is made with pea protein, brown rice, coconut oil, Halal Guys spice mix, beets, mushrooms, and paprika. It is roasted on a spit, sliced, and served in your choice of a rice-based platter or pita wrap sandwich.

The fast-food chain’s unique vegan tzatziki sauce, which is made from aquafaba or chickpea brine, can be drizzled on the vegan meat along with hot sauce for a flavour-bomb experience.

In addition to the vegan gyros, the chain has also unveiled a limited-time-only Eggplant Hummus – another vegan option made with chickpeas, mixed with tahini sauce, olive oil, lemon juice, and spices.

The eggplants come from Greece and the meal can be ordered on its own as a side dish, on a platter or sandwich, or as a catering order.

“Along with our new Eggplant Hummus, we’re excited to introduce more menu items to fans of The Halal Guys who are looking for plant-based options,” the chain said.

While both the meatless gyros and eggplant hummus are not on the permanent menu, the Halal Guys team adds that  it is looking to expand its plant-based hummus options later this year.

Meanwhile, vegans can order several other selections including a falafel platter, falafel sandwich and an array of toppings and sauces from the chain’s permanent menu.

Three Egyptians started The Halal Guys as a food cart in New York City in 1990. They began selling authentic American halal food to Muslim taxi drivers who at the time had few outlets catering to their needs.

As word about their food cart spread, their customer base quickly expanded beyond Muslim cabbies to a much larger, diverse demographic of Americans eager to experience new and exotic tastes, textures, and flavors.

The Halal Guys franchise has since expanded to include locations across the U.S. and internationally.