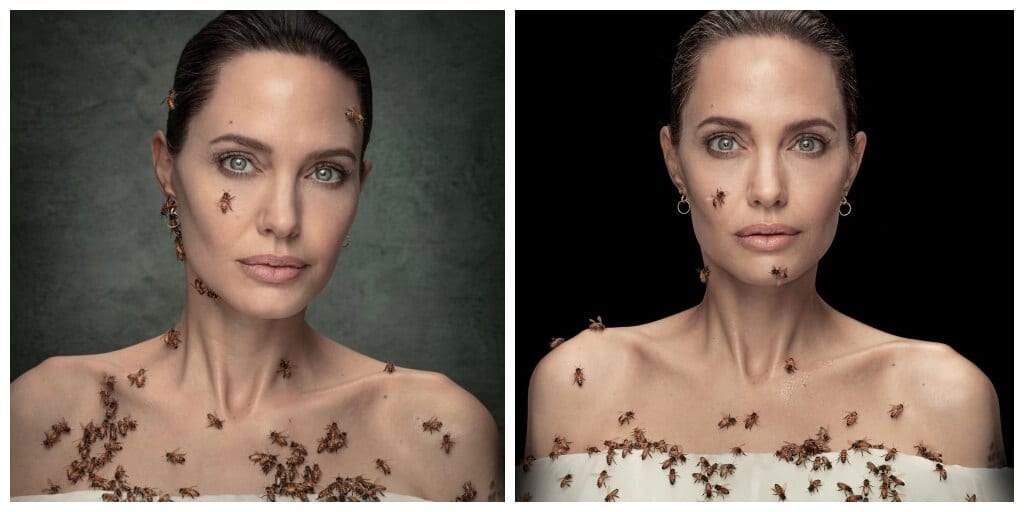 “Pollinators of course are extremely vital to our life and our environment. And so we have to understand scientifically what happens if we lose them.”

Hollywood actor, director, and humanitarian Angelina Jolie has covered herself in bees for a striking portrait for National Geographic released on World Bee Day in a bid to draw attention to the urgent need to protect bees.

The image was conceptualized by photographer Dan Winters – also an amateur beekeeper – who drew his inspiration from a famous 1981 Richard Avedon portrait that had a bald and bare-chested California beekeeper covered in bees.

“With so much, we are worried about around the world and so many people feeling overwhelmed with bad news and the reality of what is collapsing, this is one that we can manage. We can certainly all step in and do our part,” Jolie told National Geographic in an interview about the shoot.

However, nature’s industrious workers are in decline and many experts blame it on the use of pesticides, habitat loss, climate change, and intensive farming.

“Pollinators of course are extremely vital to our life and our environment. And so we have to understand scientifically what happens if we lose them,” The actress said.

“This is something we can work to solve.”

She added: “Sometimes a lot of these issues feel so overwhelming

“But then there are these simple truths and we just stick to them. When we’re losing species, animal or plant, it is destroying something. It is breaking apart the fabric of all the things that we depend on. We’re all smart enough to know that these pieces are very, very interconnected and very crucial.”

The portrait is also a means to promote the Women for Bees initiative for which the 45-year-old was recently named the “Godmother”.

It is a joint project launched by United Nations Educational, Scientific, and Cultural Organization (UNESCO) and French-cosmetics house Guerlain to train women as beekeeper-entrepreneurs and protectors of native bee habitats around the world.

Starting in June, the five-year project aims at building 2,500 beehives and restocking 125 million bees by 2025 while training and supporting 50 women beekeepers under a 30-day accelerated training course.

The first program led by beekeeping experts from the French Observatory of Apidology in Provence will be attended by women from Cambodia, China, France, Italy, Ethiopia, Rwanda, Bulgaria, Russia, and Slovenia. Jolie also plans to particpate in it.

“When women gain skills and knowledge their instinct is to help raise others. I’m excited to meet the women taking part in this programme from all over the world,” the Oscar winner said in a statement.

“I look forward to getting to know them and learning about their culture and environment and the role bees play in that. I hope the training will strengthen their independence, their livelihoods and their communities.”

Angelina Jolie revealed that she’d been vegan “for a long time” in an interview prior to the release of her action thriller “Salt” in 2010.

However, she added that she ditched the diet after it nearly ended her life.

“I found I was not getting enough nutrition,” Contactmusic reported at the time.