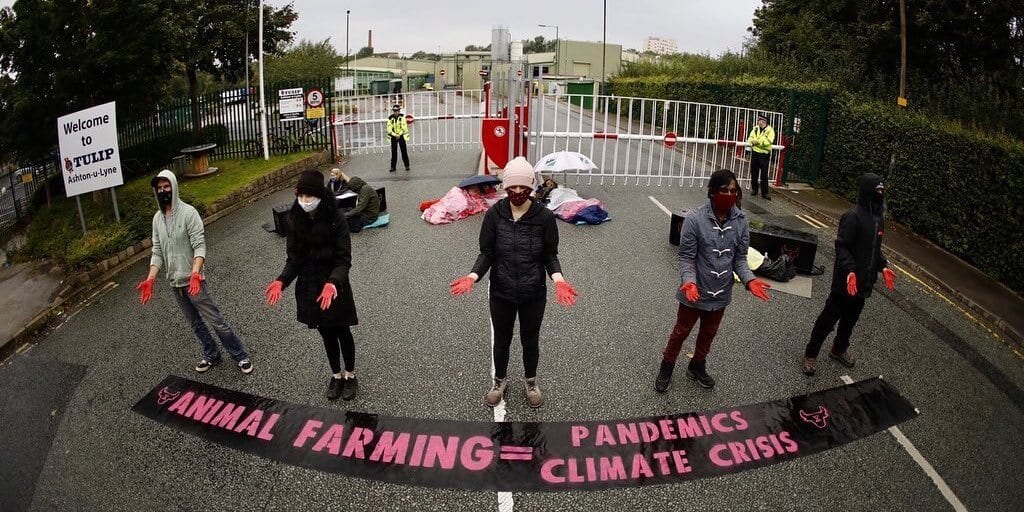 The slaughterhouse contributes ‘to the gassing of pigs, the destruction of our climate and the spread of deadly diseases between workers’

This week, campaigners from Extinction Rebellion sister group Animal Rebellion blocked the entrance of Tulip Slaughterhouse, an abattoir in Manchester.

The factory was brought to a standstill for 7 hours. The protest was to urge the factory to switch to a plant-based food production site instead of killing the 3000+ pigs they gas and stab each day.

Activists locked themselves onto coffins and a banner was laid outside the entrance which read ‘Animal Farming = Pandemics & Climate Crisis’.

Protestors also climbed on the roof of the Pilgrim’s Pride Ltd’s slaughterhouse and hung a number of banners reading ‘Defend Direct action.’ Others held up signs of ‘Go vegan’.

The protest was also in solidarity with SMASH Specieism- an anti-speciesist, non-violent, direct action group that had led a previous protest in February to highlight the criminality of gassing pigs, the health risks posed to slaughterhouse workers and the climate crisis.

“We are shutting this slaughterhouse down because we see no lawful activity being done here,” said Harley McDonald-Eckersall, a spokesman for Animal Rebellion.

“It is contributing to the gassing of pigs, the destruction of our climate and the spread of deadly diseases between workers.”

A spokesman for Greater Manchester Police said: “We’re aware of a protest ongoing outside a facility on Bow Street in Ashton-Under-Lyne.

“Officers are currently in attendance and have engaged with the group, with the aim of ensuring everyone has the right to peacefully protest.

“Six people have been arrested – three men and three women – all on suspicion of aggravated trespassing. They remain in custody for questioning.”