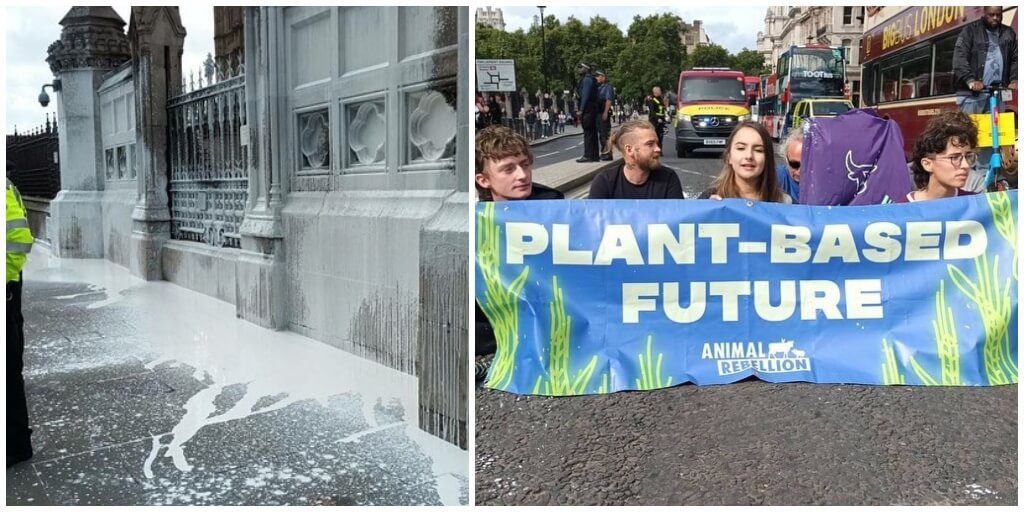 Animal Rebellion wants the new Prime Minister to step up and support farmers and fishing communities to move away from animal farming and help them forge a “plant-based future”.

Yesterday, campaign group Animal Rebellion sprayed white paint- representing milk- on the gates and walls outside Parliament near Big Ben, while protestors emptied milk bottles of the white liquid on the floor.

The demonstration was part of the organisation’s “large-scale disruption” to the dairy industry.

The Extinction Rebellion-affiliated group has been using non-violent sit-ins and blockade-style tactics since it began its campaign over the weekend.

According to Animal Rebellion the disruption will continue until the UK government agrees ‘to support farmers and fishing communities in a transition to a plant-based future, and to rewild the freed-up land to bring back wildlife and drawdown CO2 from the atmosphere’.

The protest outside the parliament has been dubbed an “escalation of their Plant-Based Future campaign” and came as the Prime Minister’s questions were organised inside the House of Commons, on the first day of Liz Truss’s premiership.

63-year-old Andrew Howard, a retired firefighter from Sheffield, said at the scene: “Today’s work is a direct challenge to Prime Minister Liz Truss.

“We are calling on her to make the drastic changes we know must happen in order to combat the cost of living, climate, and environmental crises we face.”

Aside from the protest outside the parliament, six critical dairy distribution facilities have been disrupted since Sunday, the group said.

The four distribution centres operated by Müller and Arla, together process an estimated 2bn litres of fresh milk annually.

Furthermore, activists have staged sit-ins in the dairy aisles of supermarkets in London, Southampton, Birmingham, and Manchester since the start of the campaign.

Meanwhile, Animal Rebellion’s farmer outreach team have been reaching out to the farming and fishing community to spread awareness and discuss the agenda of the campaign.

Animal agriculture and the planet

Meat and dairy consumption are detrimental to the planet. The animal agriculture industry is responsible for at least 14.5% of global greenhouse gas emissions and a multitude of environmental issues, including deforestation and water pollution among others.

AR states that “farmers have been struggling for years, feed and energy prices are going through the roof, and the government is continuing to funnel money into the meat and dairy industries – despite the clear evidence that this is not economically or environmentally sustainable.

“We must change to a food system that is not only more sustainable but kinder too – there is simply no need to be breeding and killing 1.2 billion land animals each year in the UK – we can simply invest in plant-based foods.”

The group added: “It’s time for the new Prime Minister to step up and show that the UK government cares about the British public, and support farmers and fishing communities to move away from animal farming and fishing as part of an urgent and immediate transition to a plant-based food system.”