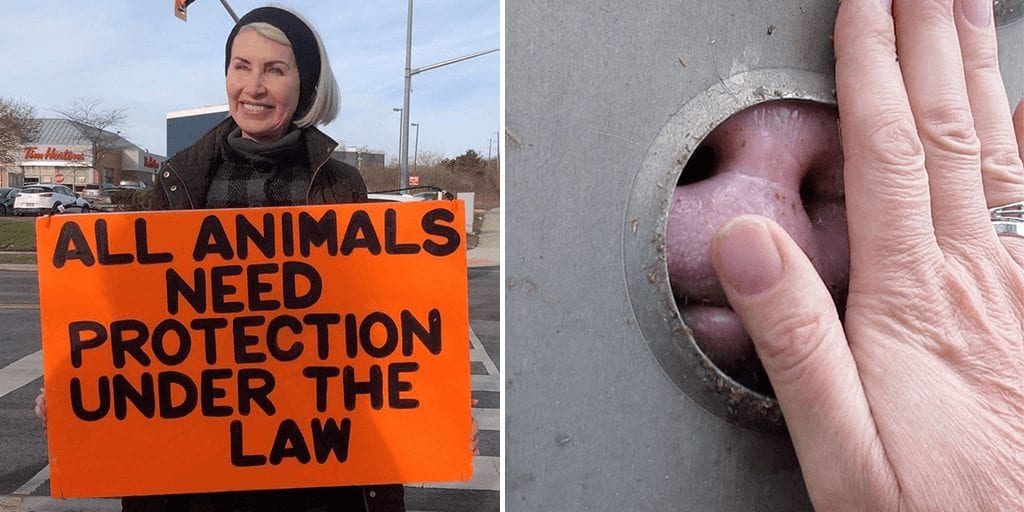 ‘Whatever it cost, she would pay … Sometimes it’s money. Sometimes, it’s this’

Regan Russell, a member of Toronto Pig Save, died after she was fatally struck on Friday, June 19 by a truck transporting pigs to Fearman’s Pork, a processing plant at Appleby Line and Harvester Road, Ontario, Canada on Friday, June 19.

Anita Krajnc, founder of the Animal Save Movement described the 65 -year-old animal rights activist as “a kind, elegant, strong, and courageous person.

“She was a mentor to others, and she always did activism with kindness in her heart.”

“She had been an animal advocate since 1979, attended vigils weekly for years, and cared deeply about justice for animals, racial justice, and protecting the vulnerable.”

According to an eyewitness, present at the time of the incident said: “The truck was there for about four or five minutes. The protesters were there. Then they walked away from the truck when they were done.

“Then I saw a woman … I assumed the truck driver thought he was clear to go and didn’t see that last protester.”

The unfortunate incident comes two days after the controversial agricultural gag (“ag gag”) law, Bill 156, was passed in Ontario on June 17. According to activists the legislation has been designed to prevent activists from filming and documenting animal suffering on farms and during transport.

Russell, an avid animal-rights activist since 1979 regularly attended local vigils, and according to fellow activists, this protest was intended to be her last peaceful protest until the law was amended.

In a statement issued to InsideHalton, Daniele Dufour, senior director, communications, at Sofina Foods Inc said: “We are all truly saddened at Sofina Foods after a pedestrian was struck by a transport truck outside of our plant in Burlington.

“Tragically, the individual died at the scene. The police are still investigating the accident and we are fully co-operating with the investigation.”

Dufour added: “Our thoughts and prayers go out to the individual and her family. This is a tragedy and we extend our sincere condolences to them.”

PROTESTER DEAD: Female protester is dead after being struck and trapped under a hog hauling tractor trailer turning into Fearmans Pork Plant in #Burlington. @HaltonPolice have closed Harvester in front of the plant. pic.twitter.com/uAeASsElrH

Krajnc called on the CEO of Fearman’s to create a safety agreement for activists to safely protest. She said: “We have a right to peaceful protest and the activist who died today … that was absolutely unacceptable and unnecessary.”

He explained that while he considered the death an accident, he didn’t want Russell’s efforts to go in vain.

“We can’t let the cause she was fighting for become lost in a fog of outrage. Keep fighting the fight, but don’t be angry. Get the word out,” he urged.