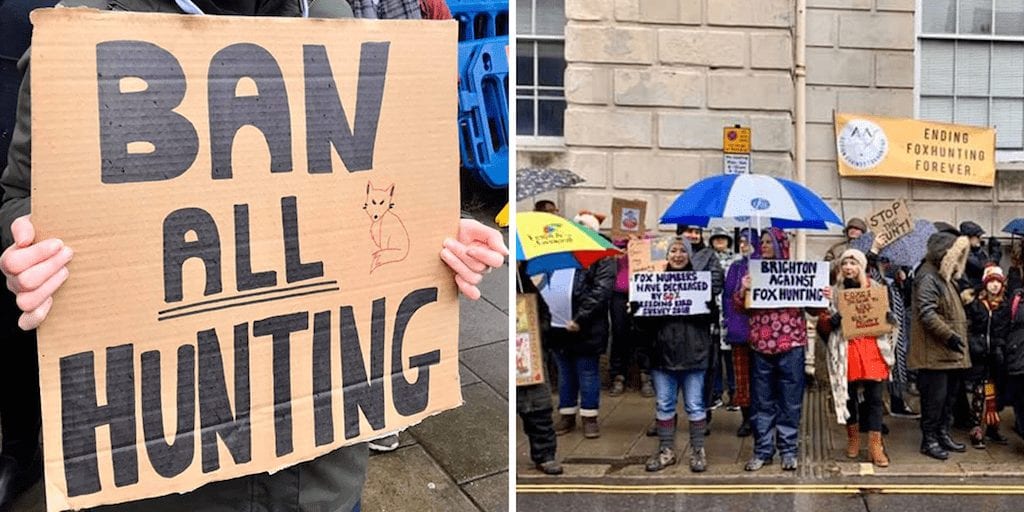 Protesters turned up to rally against drag hunting meets held on Boxing Day claiming Hunting Act “loopholes” allow hunts to get away with killing foxes.

More than 200 Boxing Day hunt meets took place across the UK and thousands turned out to support the hunts, with the most popular being Heythrop Hunt in Oxfordshire with a crowd gathering of an estimated 5,000 people.

However, the Boxing Day hunt meet has clearly divided the country as anti-hunt protestors and campaigners turned up in full-force to ‘end fox hunting for good’.

Fox hunting has been banned in England and Wales after the Hunting Act 2004 was enforced. However, drag hunting, in which hounds are trained to chase an artificial scent is permitted under the legislation.

According to pro-hunting group Countryside Alliance, the popularity of the Boxing Day hunts shows “no sign of waning despite more than 14 years operating under the confines of the Hunting Act,” reported Metro.co.uk.

“Yet again hunts have been welcomed by vast numbers of supporters who have gathered in town squares, outside pubs and in fields surrounding stately homes, to welcome hounds on Boxing Day,” said Polly Portwin, the Countryside Alliance’s Head of Hunting.

“Hunts have adapted their activities to comply with the law yet the anti-hunting groups continue to make false allegations about their activities and target their meets at every opportunity.

“Faced with adversity, the hunting community will always come out fighting and we will ensure there is a strong future for hunting with hounds, regardless of the latest desperate attempts to attack the operational function of hunts in this way.”

Echoing her stance, Oliver Dale MFH, joint-master of the North Cotswold Hunt said: “We had a crowd of several thousand here again today to show their support for our magnificent hounds. People from all walks of life came to join us on this very traditional day, demonstrating the important part that hunts play within their local communities.”

Elsewhere, Camilla Swift, joint-master of the Surrey Union said: “We’re so lucky to have hundreds of people joining us yet again at our kennels near Ockley in Surrey to show that hunting is still thriving. We are particularly pleased to see so many young people.”

According to supporters, drag hunting is harmless and is a ‘perfect opportunity to showcase legal hunting activities to the public and the media’.

However, animal welfare organizations state that ‘loopholes’ in the Huning Act allow hunts to get away with killing foxes for fun and despite the popularity of the sport, the lobbyists will continue to rally and protest to put an end to this cruel sport.

According to Cee Wetton, member of the Hunt Saboteurs Association, drag hunting only serves as a guise for the hunters to kill. She said: “They use it as a backstop, in case a fox gets killed and they say ‘Oh we were following the trail, but the hounds got away from us and accidentally killed a fox’. Well, it’s not good enough,” reported BBC.

Chris Luffingham, director of campaigns at the League Against Cruel Sports, said: “There has been a sea change in the way the fox hunting debate is being framed and with the ban now secure, our emphasis has shifted towards the strengthening of the Hunting Act.

“To end fox hunting for good, the Hunting Act needs to be strengthened by removing the loopholes and exemptions being exploited by the fox hunts to cover up their brutal activities.

The organization is pushing for “prison sentences for those convicted of fox hunting” as that “would help ensure there is a strong deterrent to prevent the deliberate and widespread chasing and killing of foxes.”

Luke Pollard MP, shadow environment, food and rural affairs minister, said: “Fox hunting is cruel, unnecessary and unpopular. It should be consigned to the history books.

“The Prime Minister must ensure his majority is not used to allow the return of fox hunting.”

What can the government do to end the cruel practices of fox hunting? Share your thoughts in the comments below!