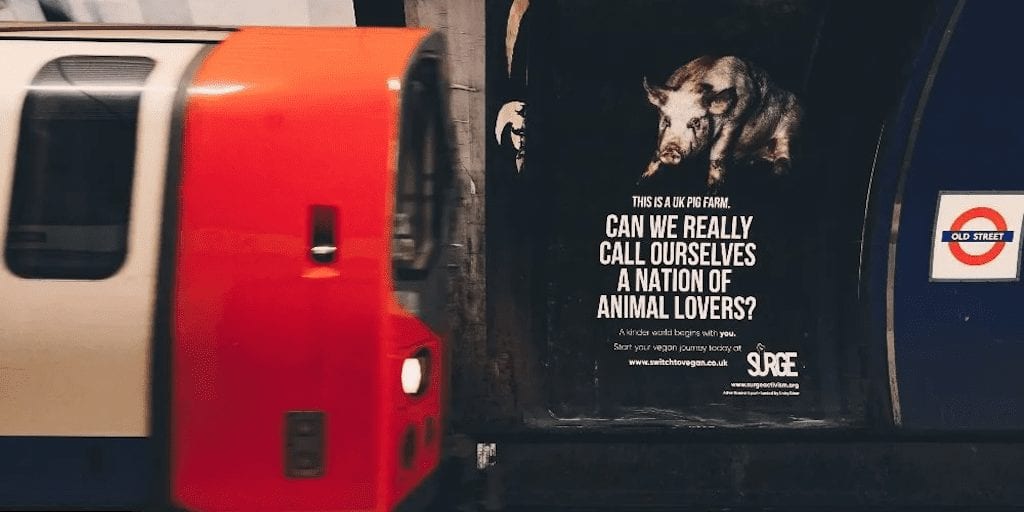 Animal rights group Surge has launched a striking poster campaign across London to encourage the public to think twice about their food choices.

Posters have been launched across the UK capital with messages such as ‘can we really call ourselves a nation of animal lovers?’ beside shocking imagery.

Surge explained the belief that it takes ‘thought-provoking questions and statements to encourage people to make the change to veganism’.

The posters are hoped to reach three quarters of a million people by the end of the campaign.

The activist group explains on its website: “Our campaign mission is to encourage the British public to question their use of animals in their daily lives and to encourage them to pursue veganism as a moral imperative.

“Our advertising campaigns are a fantastic way of ensuring that those who often wouldn’t come across the vegan message are confronted by their use of animals whilst going about their day to day lives.”

Surge is a prominent force on vegan activism, having produced Land of Hope and Glory.

The documentary shows the truth behind UK land animal farming by featuring investigations and undercover footage, with a total of 100 UK facilities featured throughout the film.

Billboard campaigns are a central part to Surge’s strategy, as the group regularly features hard-hitting imagery and messages across London.

Surge funds its campaigns in part through donations on its website.

What do you think of Surge’s billboards? Share your thoughts in the comments below!