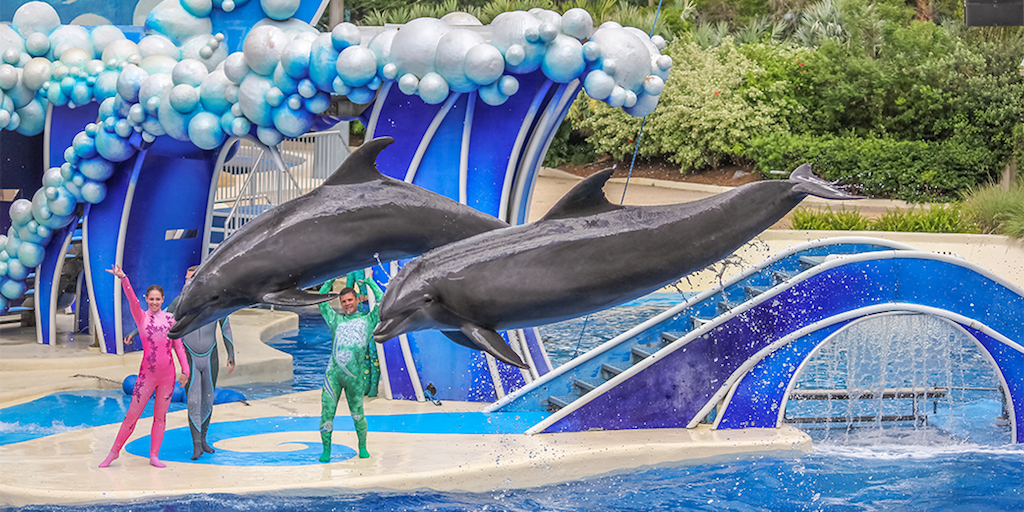 “SeaWorld crams approximately 140 of these highly intelligent marine mammals into just seven small tanks and then expresses surprise when they lash out, again and again.”

A viral TikTok video has caught the aftermath of an apparent dolphin attack at SeaWorld Orlando in Florida.

The video posted on 5 November by user @the.man.child, shows an injured dolphin resting on the side of the tank where Dolphin Adventures is performed.

Alongside the clip he shared the following blurb: “A dolphin pod at SeaWorld Orlando today repeatedly attacked one of the dolphins in the pod, while the trainers were trying to do the show, causing the dolphin to start bleeding.”

A dolphin pod at SeaWorld Orlando today repeatedly attacked one of the dolphins in the pod, while the trainers were trying to do the show, causing the dolphin to start bleeding. 😬😥😥#dolphin #seaworld #seaworldorlando #attack #violent #nature #fyp #wild #orlando #Florida pic.twitter.com/Jg80TzNUlD

Dolphin Adventures is a presentation that SeaWorld holds to let guests learn and see bottlenose dolphins interact and play.

The marine park describes the show saying: “Smart, playful, and found right off the coast of Florida, bottlenose dolphins are well-known ocean ambassadors here at SeaWorld. But there’s much more to their story, as you’ll discover in this fascinating new presentation at Dolphin Stadium.

“Explore their natural behaviours and the traits they’ve evolved to help them survive and thrive. Hear what’s behind their playfulness and how it helps us make discoveries. Learn the role they play in our planet’s oceans, as well as the threats they face. Experience every thrilling moment and take away inspiring insights about caring for our natural world, only at Dolphin Adventures.”

“This is why I REFUSE to go to SeaWorld,” wrote one user.

Another commented: “This makes me so angry that poor thing has no escape.”

A third added: “It’s so sad they are all confined like this! @seaworldorlando this is not okay!”

PETA’s executive vice president Tracy Reiman in response to the viral video said: “It never should have happened again, and how many more times must the dysfunction, cruelty, and profound animal suffering at SeaWorld be exposed?

“Left alone in their ocean homes, dolphins maintain dynamic relationships with large social networks, choose their own mates, and swim freely, but SeaWorld crams approximately 140 of these highly intelligent marine mammals into just seven small tanks and then expresses surprise when they lash out, again and again.”

She added: “PETA is calling on this hideous abusement park to end its exploitation of dolphins by sending them to seaside sanctuaries, where they would never be used in tawdry shows and no one else would get hurt.”

The charity demanded that the marine park released the dolphins from captivity and sent them to seaside sanctuaries.

SeaWorld released a statement to counter the animal welfare concerns: “This video shows common behaviour among dolphins exhibited by both wild populations and those in human care as part of natural social interactions. ”

The amusement park added that the dolphin sustained only minor abrasions and an on-site veterinarian confirmed that it did not require additional medical treatment.

“The dolphin re-joined his pod without further incident and the group is behaving normally and eating well.  All of the dolphins in this video remain in good health. Numerous scientific studies have been published about this type of behaviour among dolphins demonstrating that it is normal and socially healthy,” SeaWorld further added.

Other animal cruelty instances at SeaWorld

The dolphin attack video is not an isolated incident at the marine park.

The eyewitness stated, “We all immediately saw blood soaking the water which triggered my 9 year old daughter to start crying.” pic.twitter.com/HqFbBm5OhR

And last year, the charity received whistleblower reports claiming that the same park had housed all 10 orcas together, despite a documented history of aggression among some of them. This move led the now deceased orca Amaya to chase and injure Corky – a fellow orca that has been held captive for 52 years now.