Over a BILLION animals have died in Australian bushfires so far 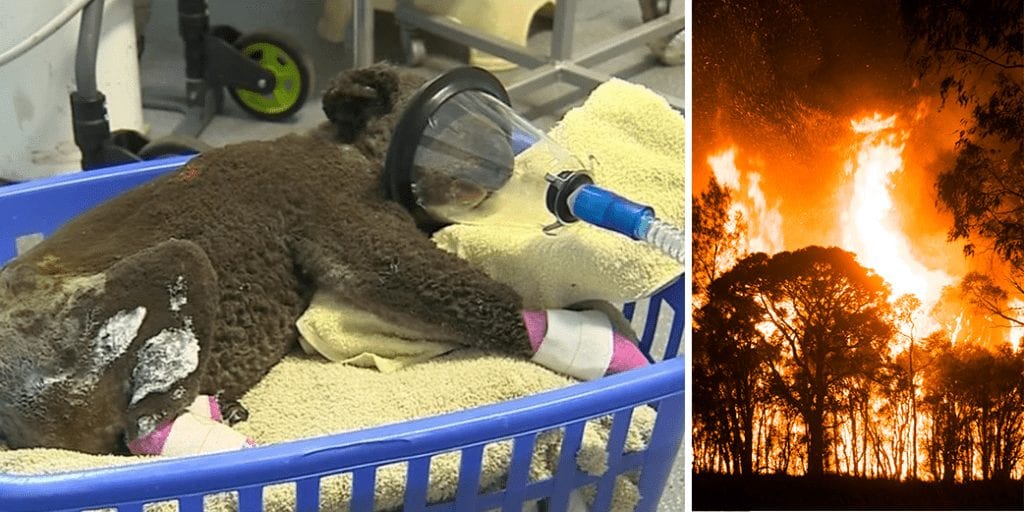 Over a billion animals are believed to have died in Australian bushfires including a third of koalas on the country’s mid-north coast – which experts say has driven the animal close to extinction.

The University of Sydney has revealed grim estimates relating to the catastrophic damage done to wildlife as fires sweep through the country.

Ecologists say 480 million animals have succumbed to the fires since September, including 8,000 koalas. The newer number includes a number of species excluded from that stat.

Australia is on fire. And the summer there has only just begun. 2019 was a year of record heat and record drought. Today the temperature outside Sydney was 48,9°C. 500 million (!!) animals are estimated dead because of the bushfires. Over 20 people have died and thousands of homes have burned to ground. The fires have spewed 2/3 of the nations national annual CO2 emissions, according to the Sydney Morning Herald. The smoke has covered glaciers in distant New Zealand (!) making them warm and melt faster because of the albedo effect. And yet. All of this still has not resulted in any political action. Because we still fail to make the connection between the climate crisis and increased extreme weather events and nature disasters like the #AustraliaFires That has to change. And it has to change now. My thoughts are with the people of Australia and those affected by these devastating fires. (Photo: Matthew Abbott for The New York Times)

The figure is an estimation for NSW alone – with experts saying that the number across Australia is likely to be ‘significantly higher’.

“Many of the affected animals are likely to have been killed directly by the fires, with others succumbing later due to the depletion of food and shelter resources and predation from introduced feral cats and red foxes,” a spokesperson for the study said.

In the days and weeks following the fires more animals will continue to suffer and many will die due to lack of food and shelter.

Koalas have suffered more than most in an area 240 miles north of Sydney which had the highest population of koalas in the country at 28,000.

A devastating 30 percent of koala habitats have been destroyed in the region, leading to 30 percent of the animals to burn to death, federal environment minister Sussan Ley reported.

“We’ll know more when the fires have calmed down and a proper assessment can be made,” she told ABC.

Many humans have also died and homes have been reduced to ashes across the country due to unprecedented bushfires.

Clinical director Cheyen Flanagan said that three quarters of the animal’s habitat has been destroyed.

The hospital has set up a Go Fund Me page and raised more than AUS$3 million.

“Donations have now reached an incredible amount and we are extending the project to establish a wild koala breeding program,” the hospital reported.

“In what is a national tragedy, the bushfires in and around Port Macquarie in November, devastated a genetically diverse koala population.  As many as 350 koalas have perished with approximately 75% of the fireground footprint being prime koala habitat.

“Some of the funds raised through the Go Fund Me site will be directed to building a ‘Koala Ark’, a facility to allow the surviving koalas to be accommodated in a healthy habitat area.  Hopefully, these koalas will breed and a new population of koalas will be established for return to the wild.”

So far more than 45,000 people have donated to the koala hospital in a campaign which could be vital to the species’ survival.

The organisation has already built drinking stations for koalas across the region.

The group will use funds to obtain vital information and research for wildlife rehabilitation after bushfires which will be shared with other organisations.

Donate to the koala hospital’s Go Fund Me page here, and share this article to help the project attract donations.