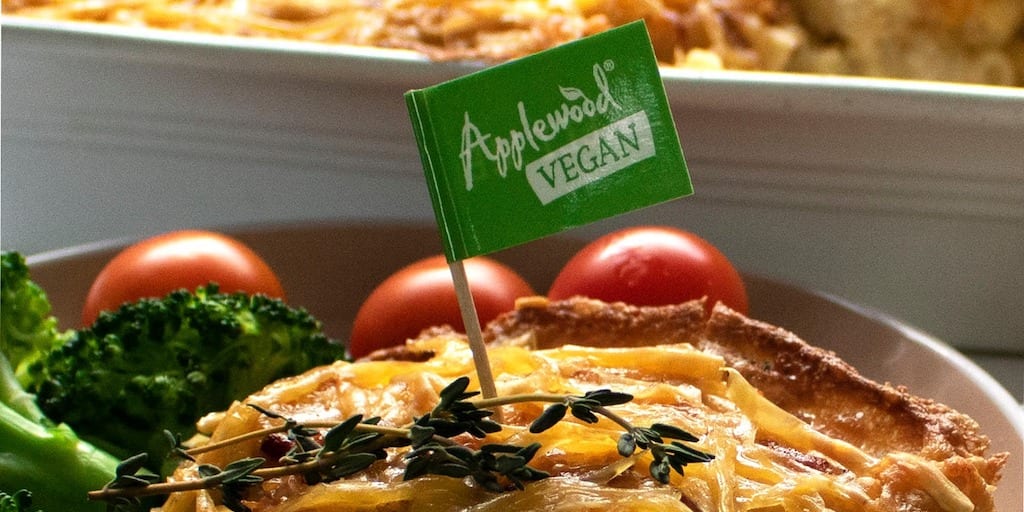 Applewood’s vegan cheese has been widely sought after ever since it launched last October.

Applewood’s first-ever vegan cheese in collaboration with VBites, has been such a smash hit that VBites has its employees working overtime to manage bigger batches.

Increased demand has also led Applewood to extend its listing from 235 to 470 Asda stores, and the Norseland-owned brand is also looking to strike deals with other retailers for a wider rollout in the new year.

The new vegan cheese accredited by The Vegan Society is made with a coconut base and is free from dairy, soya, and gluten.  It comes fortified with added B12 and calcium, and has a smoky flavour similair to Applewood’s signature smokey cheeses.

The company is pleased with the way the product has developed and the curiosity it generated before its launch led to forty percent of the cheese stocked in Asda to fly off the shelves on day one of the launch.

“The success of Applewood Vegan has defied all expectations since it was launched,” an Applewood spokesman told the Grocer.

‘Perfect for all sorts of dishes’

Describing the new vegan cheese, VBites founder Heather Mills said: “It’s dairy-free, but it’s packed with the taste that vegans, vegetarians, and flexitarians want in their sandwiches and lunch boxes.

“And because it melts wonderfully but still keeps its flavor, it’s perfect for all sorts of dishes from toasties, pizzas, and pasta to baked potatoes and cheesy nachos and even fondue.

“At last, for those thinking of changing their diet because of environmental, health, and ethical concerns, there’s no need to worry any longer that you’ll miss the taste of cheese.”

Have you tried Applewood’s vegan cheese? Share your thoughts in the comments below!