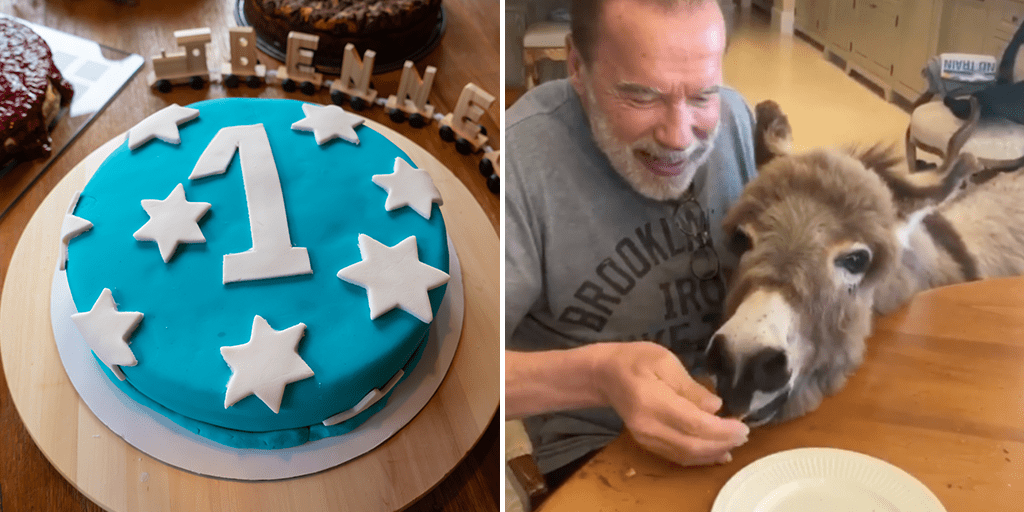 While people are coming up with unique ways to keep themselves busy during the ongoing pandemic, Schwarzenegger is enjoying the downtime with his adorable pets.

He even threw a special birthday party for his donkey, Lulu, who turned one.

In a recent video posted on Instagram, the 72- year old veteran actor is filmed crooning “Happy Birthday” to the cute donkey and calling her “such a beautiful girl,” while feeding her sweets.

“We have a birthday today! Lulu turned 1. We celebrated by letting her fill herself up with goodies,” he captioned the clip.

His other pet Whiskey—a miniature pony appearing at the end of the video seems rather left out at not getting any of the goodies.

The video has racked up 1,181,364 views and thousands of comments from the actor’s 20.5 million followers.

The actor has been fairly active on social media keeping his fans entertained with cute snippets of his pets.

In a video posted last month, the actor sitting at his kitchen table with Whiskey and Lulu urged his followers to stay home, eat vegan food and listen to experts to remain safe from the coronavirus outbreak.

While feeding his pets carrots, the actor says, in the video: “See that is what we do. We don’t go out, we don’t go to the restaurants, we don’t do anything like that,” Schwarzenegger added.

Another video shared on Instagram shows him eating his meal after a home workout and feeding salad leaves to both his pets as they nose his food for a bite.

“Yeah, what you like. You like some salad,” he asks Whiskey and playfully nudges him away from his food saying “its mine!”

Although the former politician and bodybuilder has not confirmed if he is vegan, the actor has extolled plant-based food in the past.

“Now I eat more oatmeal, and greens, and vegetables, and healthy foods,” he said.

“I stay away more from the meats and more from animal products, and animal proteins, because there was this misconception that that’s the only way you get big and strong, so now I back off that and I feel much better.”

Share this adorable video to lighten up somebody else’s day.