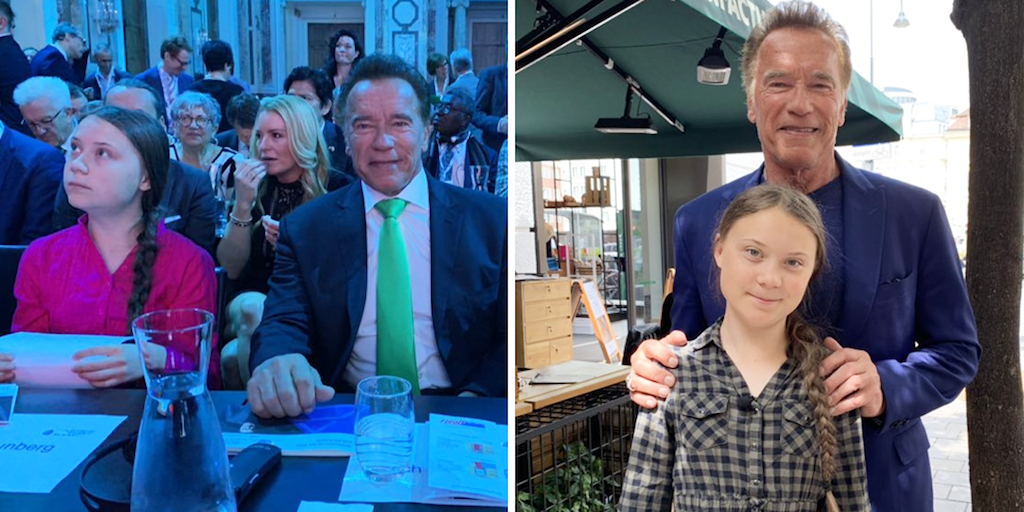 Greta Thunberg has a new number 1 fan in Arnold Schwarzenegger, after he offered to lend the vegan teen activist his electric car to continue her climate tour.

The Swedish activist will move from the UN conference in the US, where she gave a powerful speech to world leaders, to continue leading strikes in Montreal, Canada.

Schwarzenegger has been a fan of Thunberg for some time, and earlier this year tweeted that he was ‘starstruck’ when he met her. He also praised her as ‘someone who doesn’t just complain but gets out and does something about it’.

Thunberg started striking outside the Swedish parliament every Friday last year, which has eventually sparked school strikes involving millions of children across the world.

And Schwarzenegger’s admiration for the teen convinced him to offer her a helping hand as she tours the world to inspire climate action.

During an interview for Swedish talk show Skavlan, Greta explained: “One of the funniest offers I’ve received is that Arnold Schwarzenegger has offered me to lend his electric car if I want to.”

Thunberg’s emotional address of UN delegates this week has been heralded across the world.

She told leaders: “You have stolen my dreams and my childhood with your empty words. And yet I’m one of the lucky ones. People are suffering. People are dying. Entire ecosystems are collapsing. We are in the beginning of a mass extinction, and all you can talk about is money and fairy tales of eternal economic growth. How dare you.”

Though she has received worldwide praise for her speech, some used the opportunity to put down the 16-year-old activist.

In a recent interview, Fox News guest Michael Knowles described her as a ‘mentally ill Swedish child’ who he said was being used by her parents and the left.

But Greta got her revenge after she changed her Twitter bio to mirror the president’s patronising tweet.

What difference will Greta Thunberg’s activism make? Share your thoughts in the comments section below!