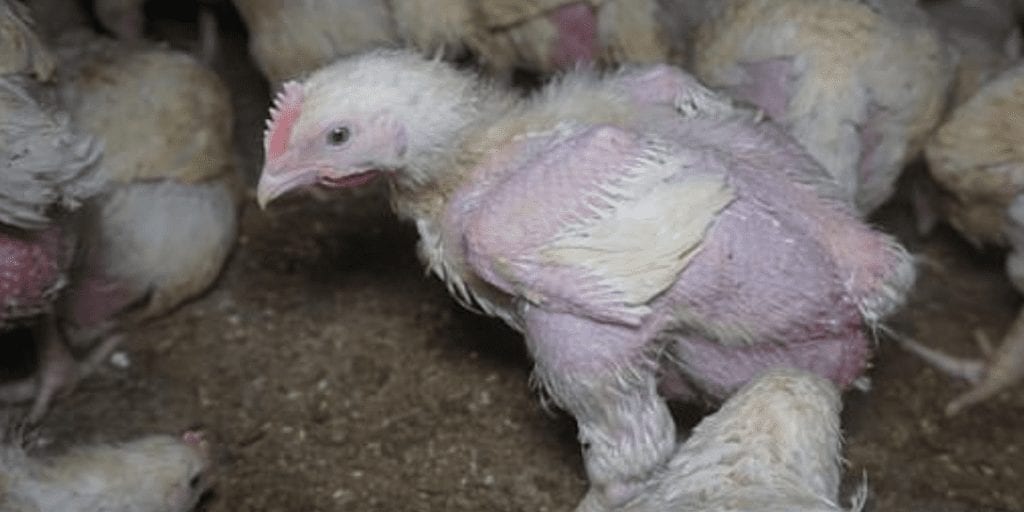 An investigation has revealed abuse at major chicken farms

Workers on farms which provide Asda, Lidl and Nandos with chicken have been exposed for their brutal treatment of birds in a shocking video investigation.

Harrowing footage shows birds being kicked, convulsing on the floor in pain and living chickens being thrown into piles of dead birds.

Dead chickens are also seemingly left to rot among living animals, which appear to be so desperate for food that they resort to cannibalism.

Many of the chickens in the farms are in a terrible condition – featherless, red-skinned and too weak to stand.

The farm is approved by the Red Tractor Scheme – an organisation which regulates good farming practices – and it stocks supermarkets and restaurants with whole chickens and meat for a variety of products.

The video was shot by welfare organisation Animal Equality after the group said it found a binbag full of dead birds at the farm, so decided to install hidden cameras.

WARNING: The below video contains graphic imagery which some viewers may find distressing

The group explained how the footage shows workers kicking large flocks of birds and throwing those unfit for slaughter into a pile of dead animals, leaving them to suffer for hours.

The Northamptonshire Farms – Evenley, Pimlico and Helmdon – supply Avara Foods, which provides 4.5 million birds for supermarkets and restaurants every week.

Animal Equality’s UK director, Toni Vernelli, said: “Headlines about American chlorinated chicken would have us believe British birds live a life of luxury but these harrowing scenes reveal the truth.

“Bred to grow so unnaturally large that their joints and hearts can’t cope, chickens on British farms suffer every minute of their lives.”

The video shows the farm littered with dead animals, and others convulsing on the ground in agony. Red Tractor requires farmers to check farms daily and remove dead birds as their corpses are distressing to living animals.

A Red Tractor spokesman said: “Animal health and welfare is at the heart of Red Tractor standards.  As soon as we were made aware of alleged breaches to our standards, we launched an immediate, independent investigation.

“Red Tractor has conducted on-farm spot-checks. The Animal and Plant Health Agency also inspected the farms and no major issues were found.

“The footage highlighted some issues in terms of Red Tractor standards and we required all personnel involved with the three farms to undergo additional training including the prompt identification of sick birds, bird euthanasia and behaviour around catching. This training has now been completed and verified by a vet.

“The farms are now subject to a strict programme of unannounced inspections.”

Avara Foods said in a statement: ““We take our responsibilities for the birds in our care very seriously, and their health and welfare is of the utmost importance.

“We have closely examined the contents of this report to assess compliance against our procedures. Initial findings indicate that, for the farm involved, our requirement to remove any culled or fallen birds as soon as they are identified has not been followed.

“We will take all necessary action to ensure that this situation does not recur. Anyone found not meeting our standards will be subjected to comprehensive retraining and further steps taken if appropriate.”

A Nando’s spokesperson said: “We expect all our suppliers to operate to high standards and we are disappointed. We will be working closely with the supplier to get to the bottom of these allegations, ensuring immediate actions are taken to bring all their sites up to standard.”

Lidl said in a statement: “Our members take their responsibilities to animal welfare very seriously.

“Any breaches to animal welfare are totally unacceptable and should be investigated immediately, with swift action taken to rectify any issues.”

An Asda spokesman said: “We take animal welfare extremely seriously and are investigating with our suppliers.”

What do you think of this investigation? Tell us in the comments section below!