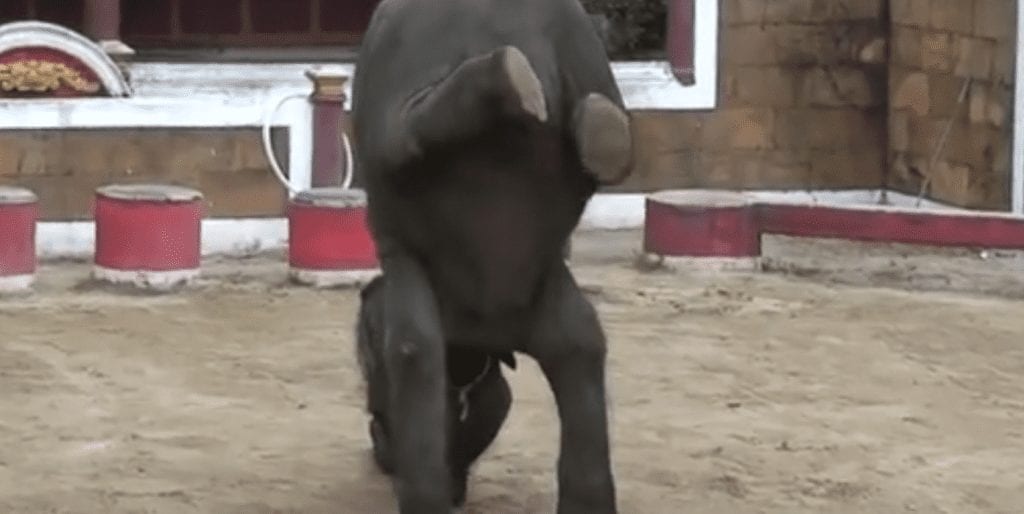 Elephants are forced to do complex tricks in Thai zoos.

A baby elephant known as the ‘real-life Dumbo’ who was forced to perform tricks for tourists at a Thai zoo has died, leaving activists who campaigned for his release furious.

Campaigners had posted photos of the Dumbo looking extremely unwell at Phuket Zoo – where Dumbo’s legs snapped and he suffered from an infection in the lead-up to his death.

Moving Animals had been demanding Dumbo to be released since April as they said the treatment at the zoo was cruel.

The group launched a petition calling for his freedom which attracted 220,000 signatures, and released shocking footage of him looking ‘skeletal’ and being forced to perform.

“We are devastated to announce that ‘Dumbo’ has passed away,” Moving Animals posted on Facebook.

“The campaign revealed his ‘skeletal’ body to the world, which raised concerns that he was ill.

“It now turns out that he had an infection in his digestive tract, and he became so weak that his back legs snapped beneath him.

“Despite this, the zoo did not realise his legs were broken for three days, until the baby elephant was finally taken to an elephant hospital.

“For ‘Dumbo’ to die whilst under the so-called ‘care’ and ‘treatment’ of the zoo shows just how neglected these animals are in captivity.

“We want to thank everyone for their overwhelming support for ‘Dumbo’. We hope that ‘Dumbo’ is now finding the peace that he was so cruelly denied in his lifetime, and that his tragic story will urge Thai authorities to finally put an end to these outdated animal performances.”

Medics at the zoo told Phuket News that Dumbo was injured after being stuck in thick mud, but the keepers had not realised his legs were broken.

He was then taken to a veterinarian, but refused to eat and died three days later, according to reports.

Pichai Sakunsorn, manager of Phuket Zoo, denied that Dumbo was abused or neglected before his death. The zoo is entitled to buy another animal as a replacement.

What do you think of the treatment of Dumbo? Share your thoughts in the comments below!