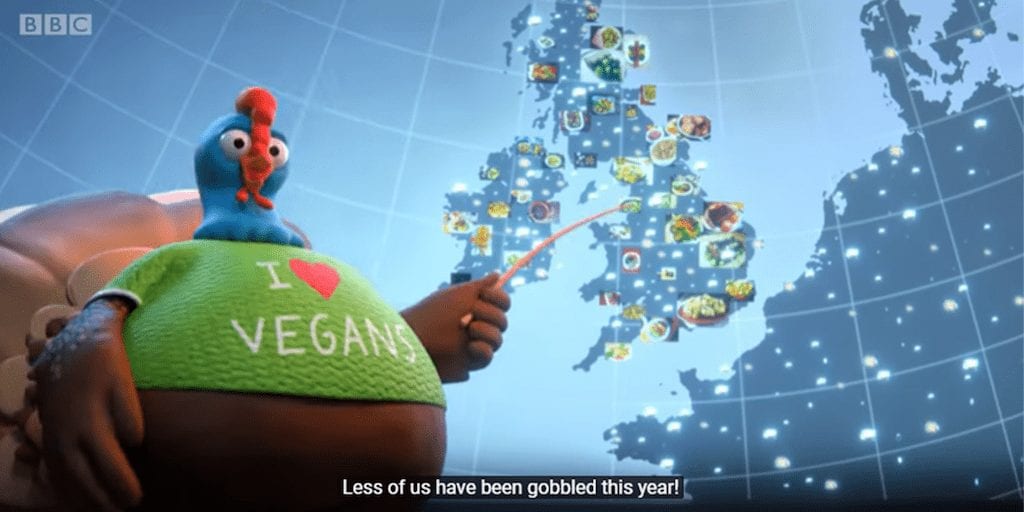 The National Farmers Union have branded BBC over advert that seemingly endorses vegan and vegetarian diets.

BBC’s Christmas advert for this year #XmasLife is a short promotional film themed around families and friends enjoying the festive spirit leaving other stresses behind.

But the advert has upset a section of the society as farmers feel that BBC has violated its impartiality rules by promoting veganism in certain scenes.

For instance, in one scene a turkey wearing a green knitted jumper with a ‘I love vegans’ message printed across is seen pointing to a map of the UK with various pictures of meat-free dishes superimposed on it.

The turkey draws a cheer form the crowd as he says: “less of us have been gobbled this year,”

In another shot a yoga teacher states: “We don’t have to eat rabbit food for breakfast any more” as she readies herself into a yoga pose.

In yet another scene, comedian Harry Enfield is seen trying to cut himself a slice from a nut roast.

The National Farmers Union (NFU) are unhappy with the advert and intend to lodge a formal complaint.

“We are deeply concerned that the BBC appears to have started campaigning for a vegan diet in advertising for its Christmas programming, none of which appears to cover veganism in its schedule,” said NFU vice-president Stuart Roberts, to The Telegraph

“This will cause great frustration for those livestock farmers who feel this is further evidence that there is a wider BBC agenda against livestock farming and rural communities in the UK.”

The BBC refuted the claim stating that the advert was intended to be ‘lighthearted’ and is neither anti-meat nor a ploy to encourage veganism.

“The cartoon turkeys in ‘Go Vegan!’ t-shirts are intended to be comedic and playful in keeping with the slightly surreal, exuberant spirit of the film, rather than any kind of endorsement or encouragement of a vegan lifestyle,” clarified a BBC spokesperson.

What do you think of this commercial? Share your thoughts in the comments below!