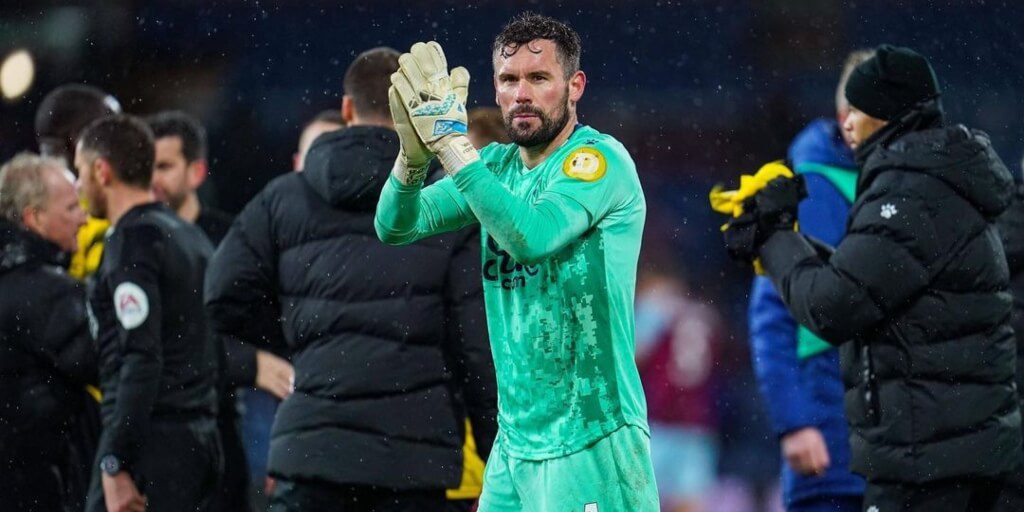 The campaign is designed to highlight the issue of thousands of marine mammals dying as bycatch in fishing nets each year.

Watford goalkeeper Ben Foster has thrown his weight behind a campaign calling to prevent the needless deaths of whales dying in fishing nets each year.

The ‘Not in our nets’ campaign is part of a wider initiative from global marine charity Whale and Dolphin Conservation. It is designed to highlight the issue – known as ‘bycatch’.

According to the charity, bycatch is the single biggest killer of dolphins and whales worldwide. Each year, hundreds of thousands of dolphins, porpoises and whales die in fishing nets across the world.

More than 1,000 per year die in UK waters alone – roughly one for every goal hitting the net in a Premier League season.

The goalkeeper is raising awareness for the campaign by using a specially designed and 100% sustainable towel during a number of Watford’s upcoming Premier League fixtures.

He has also recorded a special message for fans on his ‘The Cycling GK’ YouTube channel and has signed a number of the limited-edition dolphin towels, which will be given away to fans to help promote the campaign.

‘Use my platform for change’

“It’s my job to keep things out of nets – to make important saves,” Ben Foster speaking on his involvement in the campaign said.

“So I got involved with the Whale and Dolphin Conservation #NotInOurNets campaign to use my role in football as a platform for change, to help save whales and dolphins and keep them out of nets.”

The charity hopes the campaign will put pressure on fisheries ministers to act upon the bycatch issue. According to the group, while the UK and devolved governments have a legal duty to prevent these deaths, too little has been done for too long.

It is therefore calling on the authorities to act urgently to set clear and ambitious goals to prevent bycatch and timelines for achieving the targets.

Danny Groves​​, the communications manager at WDC said: “Entanglement in fishing gear is the biggest killer of dolphins, porpoises, and whales globally, and it’s a major issue in UK seas.

“It’s a horrible way to die, fishers don’t want it to happen, and many people are unaware of the accidental suffering that takes place to catch the fish they eat.

“Ministers must commit to targets & deadlines in the Joint Fisheries Statement to meet the legal duty to end bycatch.”

WDC adds that “If we save whales and dolphins, we stop the suffering, create a healthier ocean to help fight the climate crisis and ultimately save our planet.”

Despite speaking up for animal lives, Ben Foster, is not a vegan.

In fact, the goalie is a trained chef who prefers his steaks cooked rare.

While we appreciate Foster’s efforts, we’d like to point out to the 39-year-old that if really wants to help in ending the suffering of animals, the best option would be for him to go vegan.

Every person who goes vegan spares nearly 200 animals a year daily suffering and a terrifying death; reduces their carbon footprint, as the meat industry is a leading producer of the greenhouse gases that contribute to climate change; and reduces their own risk of developing heart disease, diabetes, and cancer.

Share this story: Goalkeeper Ben Foster leads ‘not in our nets’ campaign for whales and dolphins dying in UK waters.